"Once upon a time you dressed so fine" 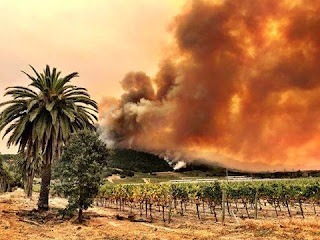 Gundlach Bundschu, a winery that I wrote about yesterday. I read a statement from one of the family members that it burned to the ground. It was the oldest family owned vineyard in Sonoma, started in 1906. It was my favorite, pretty much the only one that I would ever bring people to when they would visit.

The loop road of estate houses up in the hills that I write about often and where I almost daily ride my bike,  Lovall Valley, also all burned to the ground. The reports said that there was nothing left standing. I'm not very good at estimating costs but based on just a handful of the homes up there my guess is that the damage was well over a hundred million dollars in loss. Maybe much more, very doubtfully any less. There were a number of homes up there worth at least $10 million, or much more.

We will check which roads are open and possibly try to go back into the valley briefly today, if the police will let us in. There are blockades, many of the roads are closed. We hope to retrieve some things that we left behind in our rush. There is a home server I can't believe I left that contains all of my music and photos, maybe some more clothes, my birth certificate and social security card. I'd like to take my Martin acoustic guitar if it will fit in the car.

I tried to access the server remotely yesterday, but it was not available, which could mean something as simple as the power was out, or it could mean more than that. I do not yet suspect the place has burned down. It is hard to know, the reports are not detailed and the damage is widespread and still spreading.

I have my work computer with me now, which has some pictures on it. I might grow to cherish this site soon as being the only remaining repository for pictures of my previous life. Who knows, I am trying not to be morbid or maudlin, but loss ignites the imagination the same way that gain might for others. Fire of this kind is like losing a very big lottery without ever having bought a ticket, without ever having wanted to play.

Perhaps I will start life anew, wander off into another desert identity like Jack Nicholson's character in Antonioni's The Passenger.

Many years ago, there was a woman that I had a crush on, the visionary type. I would often think of hugging her all day long on Sunday in bed, wearing only our underwear or less. None of that ever happened, but one day her house burned down while she had run to the store in only shorts, shirt, sandals, and presumably underwear. She came back to the house that she grew up in, the one that her parents had left her, and it was gone, or rather it was going.

The firemen were there and trying to save the cinders, but it was too late. For months afterwards she would describe to me the feeling of suddenly not being sure who she was any more, or where she belonged. I tried to convince her that she was the type woman that belonged in her underwear with me, on any Sunday or Tuesday and all the days between, but it was not meant to be. Not even the complete loss of her house and all of her belongings was enough. I can understand how she might want to keep her shorts on after something like that.

I remember her telling me the replacing and use of the smallest things became the most unsettling part of what had happened - a hair clip that wasn't the same as the one she had on her bathroom sink, the fresh note pad she now kept in her newly purchased backpack seeming as if she had just picked up someone else's life accidentally, feeling as if she was wearing somebody else's clothes. There were also the small things that could not be replaced, where no replacement was possible. She kept thinking about her shower, that she felt as if it was still out there and it was only her that was now somehow in the wrong place. Her bed, her sheets, her pillows.