Pirates before a midnight run 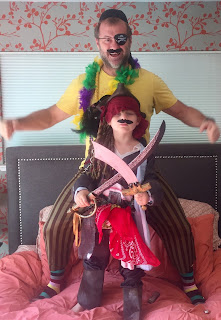 What a week, or two; what a mess; what disaster in all directions. There is too much to tell, too many details now forgotten, almost of necessity. Too much stress.

Once we left the house that we were staying in we were then lent a studio apartment in Berkeley. It would be just Rachel, Rhys, myself and Barkley the dog. We knew that once we had space to ourselves we would likely suffer some of the stress that we had each been repressing. Life is easier when you are distracted, when there are other people there to get along with, to help. People whose problems made ours seems less significant. Once those people were gone then we would confront our own difficulties, which were by comparison not nearly as severe, though experience of this kind is always cumulative. Everything was becoming too much for each of us. It could be felt even in the niceties. We needed new terms, the old ones were too much in flux.

So, the studio in Berkeley.

Had the internet functioned at something beyond 90s up and down standards then it might have been passable. It wasn't. I couldn't even tether from my phone, the network signal too weak from within the closed doors on the second floor. The place was lovely, though. The 21 year home of an older woman who was clearly intelligent and well traveled. Her books alone made me want to stay - Japanese art books, various design books from diverse sources, Faulkner, European works, other classics. The place was decorated along those tastes, also. There was an Egyptian camel saddle as one piece, tables from Japan, China, maybe India. Everything was interesting to look at, everything unique, antiques collected over a lifetime of travel. A fascinating place with comfortable places to read, which is all that I wanted to do.

I retired to the bedroom early-ish, even for me, and began to do so. Trying to focus on the words, then the paragraphs, then the setting - NYC. It was the collection Up In The Old Hotel by Joseph Mitchell. Familiar street names and even a few familiar places - McSorleys - all from a very different time than mine, decades previous. I was about halfway through the first essay on Joe Gould when Rachel walked into the room and very calmly said, I am only asking you this because I know that you love me very much, but can you come out here and tell me if you smell smoke?

It was the smell of smoke. I went barefoot downstairs to the street and it was everywhere. It could be seen between where I stood and the streetlight, moving quickly enough. I yelled up to the window for Rachel to call 9-1-1. Somebody from their window yelled down to me, asking if I smelled it also. I yelled back that I did. I did. I yelled again to Rachel, then maybe once more, louder. Nothing. As I started to run back upstairs a young woman there on the street with me asked if she should call 9-1-1. Yes and yes. Barefoot still, I ran back upstairs, not quite in a panic, but very uncomfortable with them still being on the second floor. The fire was close. This one was. Nearly terrified, I looked in the windows of the first floor for any sign, any flash of danger.

Upstairs I grabbed my shoes, wallet. Rachel grabbed Barkley. We both gave terse instructions. No time to grab anything more, just get downstairs, all of us, now.

By the time we were all standing out on the sidewalk a single stretched minute later more people were outside, all agreeing with each other on the smell and sight of smoke. A few of us walked around a bit. I gave up looking quickly and first. My plan was to leave California and never again look back. I am not sure if that does not still represent my newly completed plan.

The firefighters arrived in the big red truck with sirens and lights, a rectangular savior machine. They all looked around and agreed also. There was a fire, it was close. In truth the smoke and smell had lessened greatly by then. They said that was okay, that calling them was the right thing to do. This did nothing for my state of nerves standing out on the sidewalk, pushed out of one last place again by some blaze somewhere. I had had enough. I wanted an apartment in Atlantis, no matter the hurricanes that might pass through. The stress was overwhelming. Smell does a very strange thing to the mind. The adrenaline was rushing through my body, arriving in my words. With nothing to fight, flight felt natural and still does.

Its effects are immediate and can be lasting, smell. We lack the ability to recall scents individually. I vaguely remember once reading why that is. There is some evolutionary advantage to its purpose. I hope that is what all of this is for, some increased chance of survival.