Fahrenheit for a ~50 one 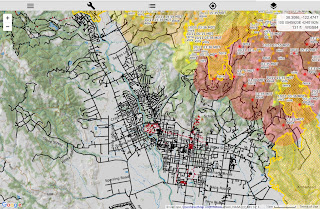 Where we live is located at the red center of the image shown above, but so many of the maps and updates are unreliable and unconfirmed. This was taken from the most recent update from the government, but you know, they fuck lots of things up all of the time, so why not fire? There was no legend or key to this map and it does seem that the fires are designated with different symbols and other location information that is not like what seems to be where we live. Who knows until it is all over.

Everything seems temporarily balanced between the very real and the entirely surreal. Yesterday, I went back to Sonoma once more, to recover a few things that my conscience would not let me relax without - my car, my bikes, my computer, a picture of  my mother when she was a girl, my wedding ring, boxes of other old pictures. I wanted to take my Weber grille, but I haven't owned a pickup truck since Florida. What I was not able to recover - the books I've read and many that I haven't, the remaining boxes of 12" records that survived the flood a couple years ago, what I would consider my absolute favorites, the ones I told myself that I must keep.

The scene in Sonoma was from a dream, stretching in every direction. The outline of trees in the distance were as haunted apparitions of life, the fall leaves and branches awaiting a spark, to become fuel. The smoke was everywhere, coloring every vista with both its actual and existential menace. Wildfire haunts the mind in the way that nothing else does, or has for me, yet. Its barely predictable direction makes it a terror like few other events. Its destruction rarely partial, more likely complete.

I stopped at the pub and had two beers, the only people there had been evacuated from a few miles north of where we were. The fire was within two miles.

As I was leaving the announcement was made that the mandatory evacuations were now in full effect and being strictly enforced. The things I looted from my home and had in the car would be all that I was sure to have saved until this is all over. I tried to look across my shelf of books but it was too much of an emotional effort to undertake after everything else. I tried to find examples that could not be easily replaced, but my eyes only made it about 20 or 30 in before I recognized that these can not be saved.