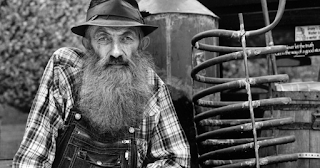 We went to dinner at some friends' house last night. After we ate chicken and drank rose and white wines there were mason jars of flavored moonshine brought out. I wept at the loss of federal tax revenues that these unlabeled jars represented, such is my fervent patriotism and belief in the current tax codes. It is not illegal to own a still, but it is illegal at the federal and state level to distill alcohol without a license. Only alcohol derived through fermentation is permitted for personal use. Such are our freedoms, which rather proves the need and purposefulness of strict taxation laws in this regard.

The Beverly Hillbillies we are not.

I hadn't had moonshine in many years, decades, since being in Florida. I remember a keg party where somebody had mixed a bunch of moonshine together with Hawaiian Punch in a garbage bag. The corner was cut off and held carefully by a team of two to control the outbound flow. We each took turns drinking generous gulps of the stuff and then pretending that the burn was liberating. About a hundred teenagers went from being mostly sober to completely wasted drunk within a matter of minutes. Hunch Punch, it was called. Then, the future troublemakers among us all ate psychedelic mushrooms and wandered off into the woods, pesumably to be closer to nature.

We were expanding our minds, we insisted.

Thirty years later, decades spent as a traveling freelance pharmaceutical user, I question the efficacy of that method as being enriching for the mind. Though of course it is still possible that my tests are inconclusive, anecdotal. I did not always adhere to the most rigorous of scientific standards. That being said, I never had much faith in the integrity of the control group, either.

Ah well, if I could do it all over again I might have put the control group to death early on and only tested among the varied treatments of the experimental group. Control groups be damned. What have they ever done?

This isn't what I wanted to write about at all.

The image above is not my mother, as you might have guessed. I had written, Miss you, Dad... but my father ceased being a drinker even long before the story that I relayed above, and it somehow seemed disrespectful to make a joke about him being a bootlegger. If I knew that my brother would never see this then I might have been okay with it. Older brothers tend to hold in higher reverence the shared origins of family. Younger brothers tend to be more like me. A River Runs Through It tells a symbolic portion of the dynamic story, based in part of course on old Cain And Abel, though Cain was the older brother whose jealousy resulted in a rather different outcome than did the River Runs narrative.

This isn't what I wanted to write about at all.

Well, my own son gave me a collection of very sweet Father's Day gifts this morning. With the help of mommy they packaged a few articles up, some collected and some made, all very touching in their representational way. A painted coaster which showed the boy and I tent camping underneath a tree with a campfire burning melted my heart a bit. The boy is nothing if not sweet in his affections for me.

Soon, we will go to breakfast. There is a jazz festival in Oakland which we will attend, an event of my choosing among the three presented. We will relax together and listen to the notes float and dance across the lawn, eating barbecued foods and sipping refreshments as the shade stretches first one way and then the other, all the day long and then into the evening where the shadows become determined by less than solar sources.