Practicing a return to the south 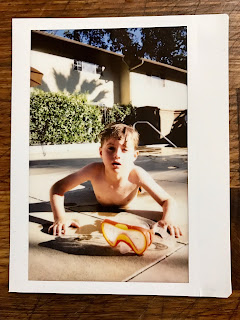 Okay, I was in a rush yesterday. I ate a quarter pounder with cheese and fries for lunch. I'm not proud of this. It affected my body and mind like a poison. I was in a foul mood for most of the remainder of the day, which partially explains my post. My diet has room for improvement. I try not to be fat, but I simply love eating cheeseburgers. Maybe there aren't enough mirrors in my apartment.

Well, the tickets have been bought and plans are now being made to go to Florida in July with the boy. He is quite excited. He will get to meet his uncle and cousins, go to DisneyWorld, Kennedy Space Center, and he'll get a taste of the Florida beaches that I grew up near. Once you've embraced a beach lined with cars, like a vast one-sided sand parking lot that faces the eyelids of infinity, then nothing else really compares.

I hadn't realized how much I would miss Florida beaches, but they are really something. They are the state's golden lining, without which the state might have been sold long ago to the first or lowest bidder. The peninsula disappears into the Bermuda Triangle every so often and comes out weirder than ever. CS sent me an article yesterday about cannibals wandering the state and eating human flesh to cure their diabetes and depression. The mainstream media and big pharma have kept this truth hidden from us for too long, of course. They refuse to even discuss the important scientific findings of these men.

As soon as I bite a woman's butt my depression starts to go away, works almost every time.

I once read an article by Colin Wilson, author of The Outsider, who asked a simple question and then tried to answer it: Why do we bite each other? The implications of the behavior range from playful to disturbing. This new knowledge almost acted prohibitively, though it didn't stop me from biting women's butts as an antidote to my depression. I would just have to remind myself every now and then that it's totally fine that I'm emulating eating this woman. She seems to enjoy this mock ritual of consumption.

I've read that in Japan they have developed genetically modified butt flesh that is now more pleasing to the teeth and releases a greater concentration of anti-depressant hormones. Clinical studies indicate that this augmented gluteal flesh is even more effective in curing depression than its natural counterpart, and they are still working to improve its Band-Aid flavor.

The science is still out on diabetes.

I'm arguing with an old friend about the debunking of climate change online right now. He believes that no question concerning statistical data is too small to prevent us from completely tossing out all physical evidence of the existence of man-made climate change. I posit that maybe we should be looking at the evidence, especially since so much of it points to a similar conclusion. He sees uncertainty in how quickly the climate is changing as the lynchpin of an assured conspiracy. He mocks Al Gore, so I know he's done his research.

It's tremendously pointless, I know, but what else am I to do while I wait for my next shipment of genetically enhanced butt flesh to arrive from Japan? Am I expected to do nothing at all to treat my crippling depression?