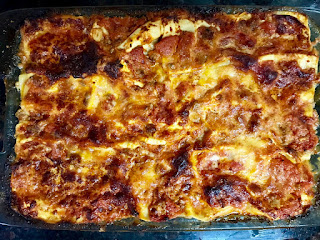 Rastah-Christ-I, I love this album. If you don't have it and love it as much as I do then you are stupid, wicked, vile, or dehydrated. They were great. I wish that they had held their shit together a bit better after Marley died. They were the obvious band that should have taken the torch from him.

Ah well, that was the 80s, things were very topsy-turvy back then. Punk and disco had merged to make new wave and bands suddenly seemed to lose their temporary fascination with reggae, all at once. They wanted to indicate to everybody paying attention that the 70s were over, I guess.

My buddy, Kelli, sent me a cookbook. So far I have only made one thing from it, though I have made that twice: lasagna. I don't wish to brag... but it was better than anything else anybody has ever tasted before. That's my James Lipton, Inside the Actor's Studio, assessment. Truly. I am up there with the greats now, the culinary masters, on par with Chef Boyardee and Emeril Lagasse.

The impulse to cook has been reawakened within me. It's the cleaning up afterwards that discourages me. I need a submissive maidservant, preferably one who derives sexual pleasure from mild, playful humiliation. An unrepressed woman is nearly useless for my purposes. Women scare me when they flaunt their freedom. It makes me want to convert to Islam.

I have been practicing the mating dance, which culminates in a sudden honor beheading - mine.

I want to find out if the body becomes paralyzed once the head has flown aloft with Allah.

Okay, I have nothing to report. My mind is beaten, exhausted from work. I have been trying to take on more and different tasks, which is always the steepest uphill effort at the onset.

I am going to listen to reggae all day today, and enjoy the sun moving across the valley. I will follow it up into the hills on my bike, my heart pounding against my rib cage in echo with the rhythm of the cosmos.