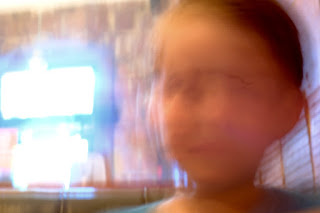 I used to go to sleep at approximately the same time as my son - 8:30pm. This gave me a minor sense of having some time to myself when I woke up, usually very early in the morning, long before most everybody else, a few private hours in advance of my son.

Then, I decided that I wanted to participate more in adult life. I started trying to stay awake a little bit later each night, knowing that I would be sacrificing at least one or more of my golden hours in the early morning.

It didn't work out that way.

Now, I go to sleep around 10pm and wake up one minute after my son every morning. Sometimes, when I am lucky, one minute before. As soon as I press the button on the coffee maker to make it jump to life I hear my son's door open. I love him much, so I don't have any aversion to this. I just wonder what happened. I'm not sure what I do with that extra time at night, but it's not nearly worth what those morning hours are to me. I don't get anything done in the very early hours of the morning any more. The evening is spent similarly, though somehow worse. Time wasted at night is less enriching than sitting and doing nothing in the early morning darkness.

I can tell you the age that this happens: 48. Forty-eight is the age at which a normal man collapses in on himself, then waits to one day burst open as a supernova.

Most of all, I don't write here much any more. I rarely say anything that I recognize as honest, if that word can be used.

I don't necessarily feel any better about my life. I just feel now as I assume most others do. I worry if I can't fall asleep. There is less of a safety buffer available to me. I even had a nightmare the other night. I feel compelled to rush from the moment that I awake. Some mornings when I open my eyes I can see the beginnings of the sunrise through the blinds and know that the clock is daily rising on whatever peace I might derive from having time and space to myself.

This alone has led me to decide that mornings are more valuable than are evenings, though that observation seems to rest on the flimsiest of data, or worse: opinion.

For the first time in a long time - maybe 30 years, maybe more - I feel predictably stable. It has ruined my writing here. I can channel the voice of crazy anytime I want, but it's cheating and I know it and now you know it too. Words derived and arranged from the familiarity of memory, the recollection of feelings rushing through me, not the sudden compulsive grip of mania itself, the drug of yes and yes and yes. My stints of depression, even, are now cute, at least in comparison to the daily public drownings they once were.

My life has fallen into a semblance of order, patterned by the needs of parenthood. It has left me feeling disastrously complete, as if a part of me is happy to have finally recovered from the addiction of youth. Though, I question what joys remain in life when populated scarcely with such mild highs. To be a parent is to not just feel love for somebody else but to feel it almost exclusively in that way. His joys are also my joys. I feel something near guilt when I allow myself the one thing that everyone reminds me not to lose: time for myself, time to live my own life.

How, I wonder, does anyone keep that and also be a parent? It seems impossible - one becomes a caregiver to their own memory, ancillary to all else. The dust collects at twice the rate. You become a fan to the witnessing of a child growing. I had believed my own past to be quite a novelty, a collection of tellable stories.

One morning you sleep past the sunrise. It all dawns on you - you can't sell it, you can't save it, you can't hide it or keep it. You can barely remember it; life ends up hiding itself.

The things that make me happiest appeared slowly, as if emerging from invisibility all around me - reading a book with no music playing, listening to the sounds of children in the distance, looking at nothing at all, closing my eyes in the park for dark minutes on end, the welcome arrival of sleep, swimming slowly underwater from one long side of the pool to the other, deliberately matched strokes made graceful by the resistance of pressure, gliding until all momentum is lost, the body divided upon nearly even halves, the moment when the shallow end drops out and away from underneath, the water colder, the bottom darker, floating closer to the edge, feeling that my body needs more air, not so much longer, always rising to the surface just in time as if I've forgotten how to take a breath that could last a moment longer than what was needed.

Today's palindrome post title was sent by Cato. Don't feel bad - it made me giggle a bit, also.