Try to set the night unfire 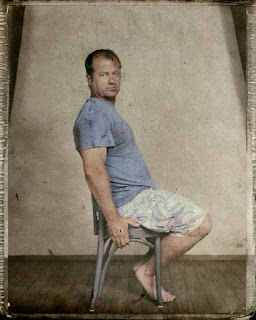 (Lead drinker of The Chairs)

Jesus, growing old is weird. Well, how would Jesus know. He was 33, we're told, when the Romans handed him over to his people to be, you know: murdered. The book to read on the subject is Constantine's Sword, a real page turner if you're interested in a personal and historical telling of the relationship between Judaism and the Catholic church. It's a barn burner.

I've been swapping out the cds in my car again lately. Giving the boy and I new stuff to listen to. Well, new to him. It has been mostly an embarrassing assortment of 60s, 70s, and 80s, rock and punk and post-punk. Two of those three designations seem superfluous, but I get it... Generation X doesn't want to be lumped in with sonic baby booms.

In any event, it has been mostly fun. Then there was yesterday: The Doors debut album. It has been years since I have willingly put it on. It was my "coming of age" album, among the first that I had that mystical, musical experience to. I had an abiding crush on a girl. I won't mention her name here, because she is as old as me now, and aging is a grim truth that I neither accept nor promote. She liked The Doors,so I went to Skaggs-Albertsons (maybe it was just Albertsons by then) and bought (or stole) three albums: The Doors, Strange Days, Waiting for the Sun.

The Doors are a great band for a child shoplifter to embrace. Nobody would bother to guard their back catalog with much enthusiasm. Their lyrics appeal mostly to a soft mind that is too young to know any better. He says some really far out things, that Jim Morrison, then at other times he is imploring us to listen for the scream of the butterfly. Miserable.

I see Morrison as more of a tragic clown now than as a poet, a harlequin that can't escape a circus of his own making. That first album was great, though, as was the last: L.A. Woman. Most of what occurred between was patchy at best. The Soft Parade is insufferable, a sunken sausage. The best moment on the album occurs right after the title track comes to a close. The entire thing is sung in the halted pre-burped cadence of a non-recovering alcoholic. Not in the fun way like The Replacements, who came across as more irreverent than apologetic about their own drunkenness. I have no idea what The Bores were thinking with the blundering Touch Me, but anybody that has to implore C'mon, c'mon, c'mon, c'mon.... now, that was touched, indeed. Can't you see, that I am not afraid? Yes, I can, and I can also see that you have pissed yourself again, Jim. You smell of once stale feces, perhaps now reactivated by the recent distribution of urine to your pleather pants.

They were trying to legitimize their music by adding the horn section from the Howard Johnson's lounge bar. Hideous.

"The Crytsal Ship" and "People are Strange" are masterpieces of that time, though. Deliver me from reasons... Still, it's arguable that the best thing the band ever did was act as an influence to Iggy Pop. What happened from '67 to '69, though? He went from trying to set the night on fire to pissing near its smoldering morning embers, and not even getting that part quite right. Only Elvis rendered himself more useless than did Morrison, though Morrison accomplished it more quickly, as if he somehow knew he only had a limited time left to enjoy waddling his fat ass up onto the stage so that he could fall over the microphone stand. A cautionary tale for anybody that might otherwise romanticize either drinking or saturated fats.

We're told that there are good and bad fats - Morrison was the bad kind.

Okay, I hadn't thought to write a rock review today and have done an incomplete job of it, perhaps an appropriate way to handle the subject. As an adult I've never been able to listen to "When The Music's Over" from beginning to end. No other song has ever asked to be silenced in a more persuasive manner, and as a built-in part of what it is trying to communicate.

Here, listen to this bit of beautifully coherent wooziness, a hint of what this band could have been:

I'm going but I need a little time, I promised I would drown myself in mystic heated wine.

He was at least an honorable man of his slur.