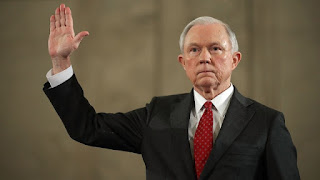 Hello sir, we're looking for two hikers that went missing near here. We were hoping that you may have seen them?

I didn't burn them!

That shouldn't matter though. This is a man that has been falsely accused his entire life. Did you know that he was found to be too racist to be a federal judge. He would regularly call one of his employees - an assistant US attorney - "boy" and they held that against him, as if he meant it in the wrong way just because the fellow was black.

Does nobody understand that for a white man from Alabama to use this generous term of endearment that it's not racism, it's his way of easing racial tensions around the office. You should hear what he calls the black folks that aren't attorneys working for him. That should give you a better idea of how difficult it must have been for him. He's a victim of a long, ongoing American misunderstanding, practically a freedom fighter. Maybe with a little luck he'll soon be fighting to maintain some basic freedoms for himself.


The market has been flooded with corruption and resistance. America has become a bazaar, or flea market, of opposition. If people would just stop accusing our president's team of wrongdoing then maybe they could begin the difficult task of some right doing.

Everybody wants to burn a witch but nobody claims to love the smell.

The more I watch the congressional inquiry into Trump's campaign's ties with Russia the less I care. I just can't write about my feelings here any more, for now. I have arrived at a personal impasse.

Who knows, maybe some dirt will be discovered that will get my head back in the game. It's tough to predict with any certainty. Lately, I want every person I see on tv to be burned at the stake. So, it might take a while for me to come around on this issue. My own problems seem so much less severe when I look out at our great national swamp being drained.

Before the Berlin Wall came down the idea of Russian collusion with a presidential campaign would have been the most mind shattering news imaginable, but the times have changed. Rex Tillerson is the Secretary of State now. What other possible evidence do we need that our government has been the target company of a hostile takeover? In this instance, both the acquirers and the current board of directors all seem eager to get the proxy deal done and dusted. Then the capital should just start naturally rolling uphill.

If you can't look at Jeff Sessions and instinctively know that he's a coal-hearted little hobgoblin of a racist then you are just not liberal enough in your assessments. What may have started out as a witch hunt seems to have actually uncovered some witchery. We know that Sessions has had encounters with witch doctors. How else did his skull become shrunken? What else could explain the mystery policy that allows Sessions to invoke the president's executive privilege when testifying in front of Congress? It's a long standing policy that anybody with the middle name Beauregard have their head used as the presidential keychain, a totem of his supremely vast privileges.

There are only two types of people left here, the justified and the ignorant.

Saudi Arabia still has legislation on their books that allows for the hunting of witches. If I ever became interested in something other than cameras then I would pay to go to the crescent kingdom peninsula and hunt the ultimate prey. I think it's bullshit that they don't allow foreigners to behead witches for cash there. How else do they expect to bring honor back to those communities that have been infected with sorcery? You need an outsider to snuff witchcraft. It's the motivated insiders that too often do the job poorly.

We live in fucking crazy times.

Saudi Arabia has the fourth largest military budget of all the nations in the world and still they do not allow foreigners to hunt witches. America is soon going to take the paintball ethos one step further and let people hunt the uninsured. Large swaths of fenced-in land where the Affordable Care Actors can be dealt with by the swift, armed, and insured hands of the market. A team building exercise for white people.

Repeal and Replace! Repeal the law, replace the branding... Voilà!

The image of Ayn Rand would be seen smiling down upon these open hunting ranges. Finally, a rational and tactical resolution to the enduring problem of poverty. The slain could be claimed as type of legitimate tax deduction. Just imagine itemizing your expenses for that trip.

I don't think it would have surprised anybody if, in an unexpected fit of elven-anger, Sessions would have responded back to the committee's questions with a demand to know when America is going to once and for all address its crippling regulations on the industry of hobo-hunting.

Let the trigger-finger of the free market do what it does best!


Why does the honorable Jefferson Beauregard Sessions III have to defend himself against the slings and arrows of false accusation when the uninsured get to walk the streets freely? Being uninsured is a pre-existing condition, or should be. How else do you explain people being born without insurance? What could possibly be more pre-existing than that? It's handed down directly from your parents.

"Nobody has a sense of humor any more." - Jefferson Beauregard Sessions III