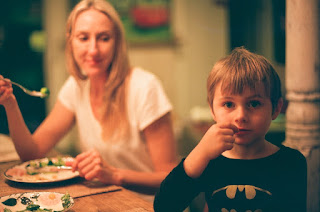 I don't care what anybody says, I love the look of color film. I know there's no real reason to shoot color any more - unless your only intention is to spend more money and time to accomplish something that can be done more easily and with less expense - but there is something that I like about the process - the lack of immediate feedback that you get with digital, the astonishing number of errors that each cost their fair share of money, the simplicity of inherent limitations, the way the camera feels and the shutter sounds, that I have to wind the film with a lever before I can take another shot. It all engages me differently.

I spent about a hundred dollars to create the image above, much more if you count that which occurred outside of the realm of hobby photography.

I like it. Film feels a bit timeless, as if it the event that it documents was from another decade - the 70s or 80s, for me. There was a ten year blackout period in the 90s in which none of my friends were allowed to take pictures. Those sure were the very best of times.