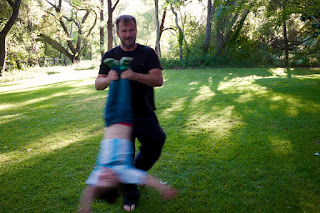 I'll only be able to swing the boy around by his feet for another month or so. He is growing faster than the camera can document, at 8 frames per second.

It is that the muscles in his eyes must react to focus on objects at close distances, where others do not. He will not need glasses as a result of it, yet, though we will keep an eye on it. It was a relief, to find that the type vision issues he has often become meaningless as he ages.

Also, he does not appear to be color blind, another fear that we had that was based on observation. He regularly calls my car "blue" when it is yellow. Though this form of color blindness is very rare. So rare, in fact, that the doctor did not have the correct cards to test for it, but he did well with all of the others and the boy seemed to have fun playing the games of finding the numbers within the colors.

The pictures above and below were just test results from me having set up a tripod in the back yard. Since purchasing a few pieces of lighting gear I have started to look at using the camera on the timed shooting setting. It is the best way to preserve images of the boy and I in the frame together, of which there are so few.

Here is me offering my first born son up to the god of the skies, begging for for an anointing to fall down from the heavens, trickling through the tree branches above, showering the land below with the warmth of love's quite bearable lightness. 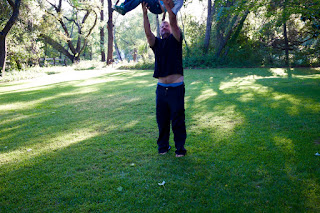 (Now self is the first sacrament
who loves not the misery and taint
of the present tense is lost
I strain for a lunar arrogance
light macerates
the lamp infects
warmth, more warmth, I cry.)