"The road to hell is paved with unbought stuffed animals." 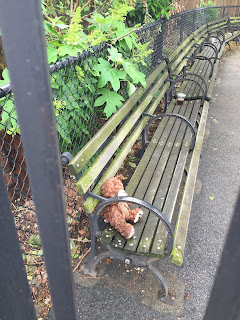 It is too late for a post today. My day is already trotting towards a gallop, whether I tighten the reins or not.

Today would have been my father's birthday. I believe that he would have been 84. I still have his phone number in my phone. It feels odd to delete it, or to even ask why it feels odd. CS said that having your father die changes a man.

I have been good at a number of things I've tried in life, but I was never very good at maturing. When I look at people who excelled at it there are only a handful of results that I find desirable, and a tremendous number of qualities that I do not. So, I suppose I made a mature decision to avoid it, or that's what I'd like to tell myself anyway. If I tell myself that often enough I can get others to be skeptical of it.

I gravitate towards those who are likewise whimsical, even defective. I don't mean that they have left their own country and sought political asylum in others, though that form of defection is not far off either. Some of them did. Some of them made it. They are still being carefree in other places, though the strain of years shows. They possess a mitigated whimsy. It can be both adorable and tedious, depending on whether or not they need a ride home, like a complete unknown.