"Underneath the sycamore tree…" 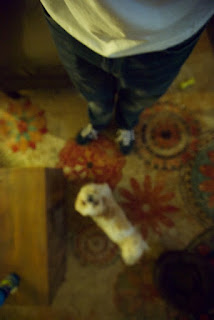 Little by little, I am slowly learning to cook. Until yesterday I had avoided using pre-prepared dishes, except for the occasional box of mac-n-cheese, made quickly, ostensibly for the boy though it ends up being  part of my meal also. Once completed, I am drawn to its buttery orange-ness. I need a recipe that is easy to make and a better vessel for nutrients than is the Kraft version. It should not be that difficult.

As with most things I was learning to cook in an unnecessarily difficult way, from scratch. I wanted to experience the unadulterated sensation of culinary failure rather than the secret victory of using a Zatarain's box of black beans and rice, but I was very wrong-headed. There is still plenty of failure to be enjoyed out of a box. I slightly undercooked the rice and beans, and then I didn't let it sit long enough after taking it off the heat, but I have another dish under my belt: blackened chicken and New Orlean's style rice.

Blackening the chicken was fun and works well with what I am already accomplished at, baking chicken.

Speaking of secrets…. I have a new reader here. They have been reading anywhere from 100-200 pages a day. It won't last long. I know. But it is odd and exciting to see someone devouring my past in this way. Binging - it is what draws people to the game of bingo. The thrill of it all. The poor man's Eureka!

I suspect it's a woman, my new reader. They can be so lovely. I am always disappointed to find out that some old friend of mine from my middle school bus stop has discovered my blog. They'll finally reach out one day and write in their understated tones: Man, you were always fucking weird. I new it. I new it, bro.

I want instead for their ex-wife and daughter to be reading. It's called vanity, and it can strike anyone, though it has its favorite targets. When men like my writing I think right away that there's something wrong with them. Why can't they see the glaring errors and inconsistencies? The laziness? But when a woman likes something about me then the clouds part, it becomes clear that we share a private understanding about things, a sacred trust that should be nurtured, a seed planted in the dark.

When men compliment me I can not help but think that they should go back to school, maybe a remedial course at a local college. Something, anything. Pull yourself together.

That is just one method of converting an innocent secret into a dirty one: hiding the things that you read. Don't worry, my little reader, I'll be your private confidant. We'll play a little game I learned in high school called hush-hush, keep it down now, voices carry.

No, I jest. I would never enact such a scenario with a married woman, though I suspect that my reader is not yet married. Your secret is safe with me, sweetness. I'll only write and talk about it, nothing more, I promise. In fact, I'm not even sure what our secret is yet, other than I can see you reading pages here and that your reading habits reveal you to be a human. You let me know when you want me to know. All I know is that you're reading about a hundred to two hundred pages a day and have been for a few days in a row now, even over the weekend, and also that this thing is meant to be.

Is it even possible to stalk someone unknown that is on the verge or already is stalking you? If so, I think I just succeeded on some level. I don't use Google Analytics, which would give me much more granular insight into my new little mystery, like relative location, which crosses slightly over into creepiness.

I'm going to turn this into a dating site, one way or another.

That link above is worth clicking on and watching that video, or this one. While unrelated to what I was writing beyond the phrase quoted, hush-hush, the video brought back some pleasant 80's memories coming up close, while the questions in thousands take flight.


If my new reader does not quite remember the 80's then don't feel bad at all, and do not about such things worry my obscured delight. I wouldn't have wanted you to have endured the 80s, or even most of the 90s. That's all fine and well with me. Age needn't be an issue with us, but you have already felt that. If not, then take some time to feel it now.

I'll leave this here for you so that you won't think me just some strange man popping off about the glory days of pop music. I can pop off about any number of other things, you must know.