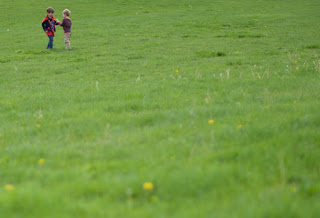 I fear that I am losing my mind. Little things, though too many of them. They each point towards a slipping. The details of my memory are becoming unattached from one another, drifting as dandelion florets. I would give details, but they are shameful. Even the general mistakes bring me unease: thinking that I never received something in the mail and then finding it in my desk drawer.

I have been trying a new natural sleep aid, and it has been working, but it leaves me feeling confused and lethargic in the mornings. Last night, after seeing a circular bug bite on the back of the boy's neck and thinking that it was the result of a deer tick attack, and then of course of Lyme disease. I couldn't rest. I awoke in the middle of the night and could not calm my mind,; fears mingling unimpeded behind the eyes.

In the morning, mom sent an updated picture and it did not reflect the dreaded circular welt that one might expect, though it certainly had that shape last night. I try not to worry, truly, but it is not easy. The world provides much to have caution towards. Too much.

In addition to losing my mind in one way, contending with lost or footloose memories, I have also been losing it in another way: listening to Billy Joel. For three days in a row from Sunday onwards I have put on Billy Joel albums. It makes no sense, at all, except that perhaps my writing here has been either mundane, resentful, or disappointed. I've had to take posts down because they exceeded the bitterness threshold. So, perhaps the Billy Joel stuff just makes sense, it speaks to my condition.

Feel as if I am operating on reserve fumes. It is becoming increasingly difficult to separate the dream realm from waking life; fluctuating back and forth between being perplexed and alarmed, worrying at how long such a thing can last.