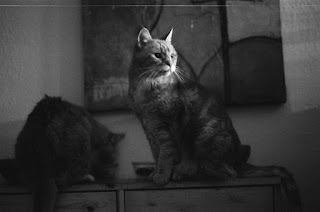 Some will think that I exaggerate for the purpose of humor, overstatement. Two hundred dollars. Some of it will be recoverable. I still own the Dutch oven that was used to make it, though I did slightly chip the handle, and there is a bottle of wine left. But $130 worth of ingredients are lost to the process of learning. When I re-read the recipe I recognize it for the lie that it is. It says it makes 4 to 6 main course servings. I filled the entire 6 qt. Dutch oven and a sizable sauce pan (at least another 4 qts.) with my culinary failure.

I threw it all out, without even finishing the single bowl I prepared for myself. I walked both receptacles to the dumpster and in it all went. It was receptacled. Now, I have to clean up the kitchen. I don't feel like it. There is a tremendous mess. I am not what could be considered a tidy person when gripped with the passions of the kitchen.

Too few seem to understand irony, particularly on social media. You have to announce that you're being ironic, which ruins the effect. I made this joke: Ruth Bader Ginsburg just lifted her leg and gently farted... which was liked by many, most of whom hated Scalia, likely not knowing that Ginsburg and Scalia were the closest of all the friendships on the court, even though they were opposed on many ideological issues, certainly social issues most of all.

Scalia believed that those were issues that should be left to the democratic process and not decided by the court, though his politics pushed his decisions away from equal rights for homosexuals and women. It is an unfortunate aspect of his legacy, but if the people who seem to hate Scalia so much read more about him I think that they would find that he was not what they believe him to be, or that he was only that if you refused to look at him in any other way.

Then, I followed it up with, Somebody poured a bucket of water on him in his sleep. At that, a few started to realize that I was making fun of their demonizing partisan hatred as much as I was at anything else.

Of course I do think that Scalia was wrong-headed and evil. It is the obligatory liberal position.

"The judge who always likes the results he reaches is a bad judge." - Antonin Scalia