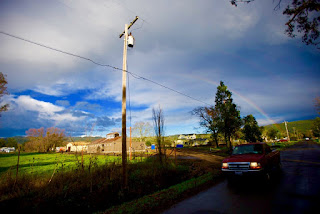 Ah payday, it's only seven short days away now... will just need to move past the hump weekend and then I'm on the homestretch towards another beefy paycheck. I have had to become more aware of my spending habits. The tax bill arrived in concert with my desire to buy a house. I've paid off all of my credit cards, and then was reminded that is what I don't want to do, so I rushed out to put some balance back on them.

It is truly amazing, how quickly the gears of commerce start grinding when you let your intentions to buy a house be known. There must be something hideously corrupt lurking just within the housing industry for them to be so eager to put me in one as quickly as the law will allow.

Well, next weekend the boy and I will take our first multi-day trip together. I mean, just he and I. We will go to Los Angeles via VW Bug. Well, sort of. Venice. We go to visit the family of my estranged Greek sister; La Matriarca de la Canales; La Griega.

Inspired by my own life, their family made the jump from NYC to the west coast a few months ago. I go soon to welcome them to the final tectonic IQ slide into the Pacific. If one stands out on the shore you can hear the plates ripping apart from one another, the tremendous tearing away from the mainland. The last speed-pipe ride towards oblivion, the abysm of freedom.

I decided only too late that I would consider joining the Oregon militiamen. Their revolution turned out to be short-lived and perhaps ill-conceived. One must wonder if any of them ever looked around the wildlife refuge that they conquered and privately counted the intellects amongst themselves. Many of those arrested and charged have unsurprisingly decided to fight their arrests in court. It will be interesting to see such a case, handled by a public defender, make it all the way to the Supreme Court.

That'll be a real hoot. Perhaps they'll try to reclaim the federal courthouse as being unconstitutional, as one can only imagine how they feel about jail cells being free from governmental intrusion. I'm sure they'll all decline the public counsel that's available to them.

Maybe they dreamed that they'll just get house-arrest, or ranch-arrest, or a cow bell put around their necks, or whatever it is they thought to think about it all.