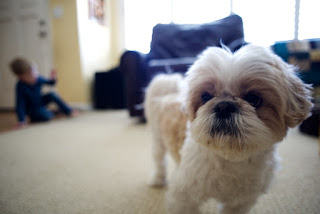 (I must really be getting old. I wrote this post yesterday but never published it…)

Wow, nobody liked my nerd post, but *almost* everyone I know sure likes it when I stop by their house when they're having a technical problem. There is always a glass of wine waiting and an empty chair in front of the computer, eagerly expecting my arrival, the drifting waft of warm cooking chicken in the kitchen.

Ah well. I expected at least one nerd to come crawling out from the crevices to tell me I had chosen a poor case for my system, or something.

The weekend is mine and the boy's. We were going to have a big adventure and go "to the Kingdom of Far Far away" but circumstances have hobbled us, so we might just spend a night in the city with a friend, watching kids' shows and eating popcorn. We'll see. Nothing is written.

The boy has been asking about death lately. he wants to know if I'll die, and more importantly, will Mommy? Never an easy conversation, as difficult, perhaps, for me as for him. I'm never satisfied with my answers, and never convinced when I say that it won't happen for a long, long time.

And then, not to worry.

My response always seems to have a bit of the why are you asking? tone in it. What do you know that I don't? When he asked if we could go away somewhere for the weekend he added that we should go to a place where no one dies. The boy has endured an unfair amount of it at such an early age. He seems to understand the concept a little bit too well for my comfort.

Well, enough about death, for now. I'll be rewarded similarly with this talk as I was with my shiny new RAID setup. I'm not sure what it is that I'm preserving, or trying to. I question whether I'll listen to MC5 bootlegs at the age of… well, at any age on the other side of right here.

Aw, just shoot,
but then shoot it to kill it.

Is not death, what is shot towards us.

An office of the law does not discharge its weapon withwash reasonable certainty.


You see, there are things that happen out in the field that you poor honkeys might never glimpse.


A bullet unshot is a life unwasted.


To see something is to sure shoot something.