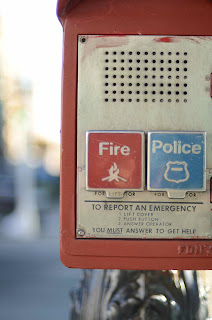 (emergency portals)
I magically slept for 10 hours last night.  I awoke and there was no food in the house so I am having a beer instead. I also pissed on the toilet seat and left the cap off of the toothpaste.  The dishes are slowly piling up in the sink, the trash needs to be taken out.  Ah, Heaven....
No, none of that happened.  Though there is a cold beer in the refrigerator and no food.  So, who knows.  Give me time and the apartment will revert into a place that is livable by a lone man, a crazed single shooter, etc. I will send time-lapse pictures, a study in reversion.
It is strange, to wake up in the apartment alone. Even when Rachel is not here Barkley usually is.  He can out-sleep me any day or night or evening or sunset or sunrise of the week.  He lives to sleep. So I usually find him at the foot of the bed, barely able to lift his head and begrudgingly acknowledge my wakefulness.
I am re-reading "For Whom The Bell Tolls" so I will probably just lie around all day and do that.  Until the beer dulls my mind with fatigue and makes it impossible, renders me a useless reader.  It is the beginning of my weekend (I had to work yesterday) so who knows what I will do.  It is hot and humid outside so maybe I will stay inside all day.
Speaking of lone shooters and reversion.  I often sit at a local bar and chat with a friend there. He is a socialist.  Or I should say that he is the type New York liberal that can't understand why all of America does not more closely resemble Switzerland, and assumes that the only reasons for it are the ones that he has concluded.  He harbors a secret hatred for America and makes odd claims about universal ignorance here.  He says that there is no "dialogue" in this country, that it is the worst run 1st world, industrialized, nation in the world.
My counter to his claim is always that it is the best run nation of 300 million people.  In fact no other nation with greater or similar populations are run even nearly as well as America.  He hates this. He keeps asking what my point is.  I respond that we are a large nation in many ways, and no other large nation is more well run, only China and India have larger populations, and very few would argue that they're more well governed.  Indonesia, Brazil, Pakistan, Nigeria, Bangladesh and Russia have similar populations, in that descending order.  Oddly, he never argues for theses nations, never uses them as comparisons from which we can gain a greater understanding of how difficult governing large populations over great areas might be.
We never speak of Rome in this regard either.
It is tiresome.  Too often I put myself on the opposing side just to prove a point to him but then it makes me sound as if I'm arguing for America's methods of governance, which I'm not.  I'm simply trying to establish a comparative basis, of which there is none, or very little, as it pertains to governing populated nations.  He is fond of citing Norway as a country of esteem and admiration. Norway has less that 1/60th the population of America and doesn't compare in any meaningful way whatsoever as it pertains to cultural and ethnic diversity.
I told him how relieved I was that the top 3 spree killings in history were not committed by Americans, and the number 1 spot now goes to a Norwegian...  A side debate that we also indulge in is that only America produces crazies.
I think, after talking to him for many years, that his main complaint is just that... He believes that Americans should be less diverse, and governed as if they were all from the same religious, socio-econimic and ethnic backgrounds.   There exists in the American mind an idea of what an American is, or should be. It nearly always resembles the person speaking, but not too much, not so much as to be obvious.  It's as if all of these liberals love the idea of America's diversity they just wish the nation functioned more like Switzerland.
Ultimately it is just that, he resists any assessment of America that does not support his barely veiled hatred of the place, of its enormity.