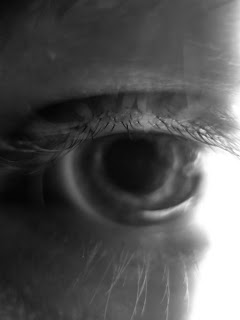 (the author's eye, naturally dilated)
I can almost predict when it will happen. Almost. The despondency, the withdrawal from life, the inability to generate my own moods, to respond to love, or the moods and love of others.  Withdrawal is not nearly as dangerous as fighting it. That is dangerous: the fight.  Struggling through it and doing things that I wrongly believe will overcome it, things that will force a break from its force. Poor decisions are made, decisions that run against the inner being, the body, others.  Struggling to convince that it is not there, the dark horse, ghost-self, that I am not succumbing to again.  Unable to experience pleasure in the routine that routinely brings me simple pleasures, I drift away.

It is hell, but at least it is a very quiet one where there are no christians.

Anhedonia is the word for it.  It is not a pleasant word.  It is a lifeless, sexless horror that sits on the heart and draws blood, slows the pulse, evaporates the nectar of life and living. This it does entirely without pleasure of its own.  It is a flatness from which there is no visible end, the stretched faces on the untouchable ground, coming and going: pleading, praying, begging.  A shifting plane on top of another and another and another of another.
I must be sorely anemic at times, a sleeping cadaver, drained of all color, but still somehow just as fat when I awake.  As if a massive mosquito goddess rides my mind, her proboscis drawing life-blood from between my eyeballs.  I am left to wonder how she flies away with so much of my blood, resembling me.
Sometimes I feel as Keanu Reeves must feel: drained and then discarded by things that I do not understand and can not control.  What I lack in understanding I make up for in agreements.
One must be careful expressing this state, or trying to.  It can too easily be read as merely tearful, which is just a state of misguided euphoria.  This state is quite its opposite; the mind fights it, the spirit seeks a way to break through it, to crack the spell.  Words fail, ultimately and always.  They are but attempts at casting a new spell, of curving the verbal land.  But they are empty and powerless, so we over-speak, plainly in vain hope, prisoners of our own poison, our own anecdotal venoms.
Never confuse sentiment with self-slaughter.  They are opposites.  If not opposites, then sentiment could be counted only as meaningless benign insincerity as compared against the anhedonic.  Its opposite is quite simple: pleasure.
We all fight in very awkward ways.  As the fight is internal perhaps even more so do we lack the appropriate skills to decidedly ever win. The best we can hope for is yet another draw.  But in time a draw is never good enough and it demands its rematch.  So rematch we do, rematch we must, rematch the fire slowly burning, rekindle the embers glowing.  Let the flames affix their dreams, I scream.
Like a lamb led to laughter. 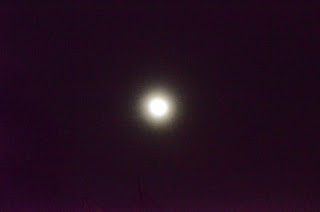