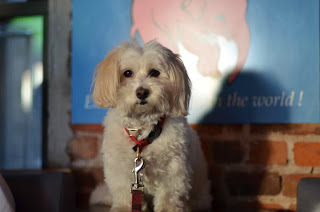 (Sabrina, a regular)
Near our apartment, on all sides, for years, there have been dog-friendly bars.  Lately the Health Department has taken up the crusade to rid the East Village of anything as dangerous as a bar that allows dogs inside of it.  Their reasoning is that these bars serve food. None of these bars actually serve food. But the ice that goes into drinks is considered food by the health department, though only when in its frozen form.  As everybody knows a dog is the greatest threat to ice, safety and health there has ever been and likely ever will be.
It is absurd, of course. Worst of all there is nothing anybody can do about it.  It is a no-win situation.
Recently the two bars that we like the most both got complaints written about them to the health department for allowing dogs in.  It was uncanny how they both got complaints on the same week, even though they are separated by several blocks. The likely culprit seemed to be another bar owner rather than a citizen. Though I make no assumptions when it comes to the absolute possibility of a New York vigilante walking from bar to bar and writing letters of complaint.  Such is the razor-sharp civic pride of many living here.
It is a money-making scheme on the part of the city of course.  Once a bar has been warned then the fine after that is in the vicinity of $2000. A couple fines and then they suspend your occupancy license.  An incident again after you re-open and your liquor license is no more.  The bar is no more.
Not that the E.V. couldn't stand to lose a few of the bars.  Just in the blocks surrounding our apartment there are an average of 5 bars per block, may of them obnoxious weekender bars. But, to each his own... I am not here to make judgements... 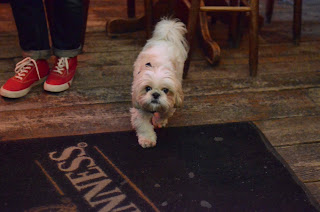 (Barkley, ordering a Guinness, his favorite)
It's not as if they were having problems with drunk dogs roaming the streets, liquored-up and looking for fights, as if they were in from Jersey for the weekend. These are respectable dogs who just want to unwind after a long day and they deserve that just as much as anybody else, maybe more.  Sure, a few of them might have drinking problems, some of them make uninvited advances from behind every now and then, all of them sniff each other's butts in greeting.  But those are just cultural differences.
Underneath the fur they are pretty much all the same....
... except for this bug-eyed fellow below.  He saw that I had a camera and wouldn't leave me alone until I took his picture. 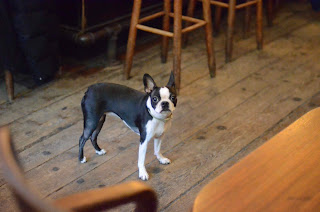