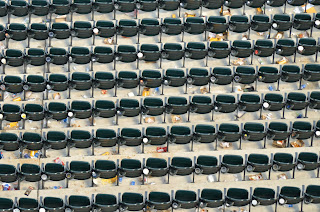 I pity people that never lust for, and have never felt, the itch of captivity. The complete and simple joy of having no responsibilities whatsoever.  The wish to just be chained, belted, trapped, seated.  It's like being on a wonderful international flight for the rest of the night: just watching clouds, or baseball, or nothing at all... just a tiny private seat near a little window on the wall of a tube, a portal from which to view the rolling earth, curved below, and so near.   A miniature pillow for one eye, and ear.

Freedom might feel quite fine for a moment, sure. But there's not much real estate there to roam around in; or far too much, depending on how it's granted, or won... Other concerns, over the years, begin to steal and creep away with bits and pieces.  First bits, then pieces.  The tickle of liberty gets under the saddle and both horse and rider get jumpy; an awful way to ride, a terrible way to travel, very 19th century.


When do we begin to decompose... or are we all just like plastic now, with insincernet powers.

The seats are designed to hold a person of just so much weight and height, though the seats keep getting smaller, the seats are slowly and always running out... though the stadium is at all times growing, in all directions.  Soon one finds oneself standing, near the stairs with others, alone, or not at the game at all.  Only watching the neighbor's television, through the windows, from the reflection on their pool, without sound... just the magic dancing of what used to be called lights.


Entirely unaware of the sport, the pastime, the gentle ease.