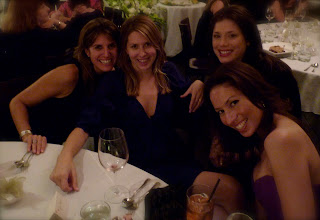 (Rebecca, Helena, Kylie, Karla)
A longtime friend and ardent supporter of this site leaves New York today, Kylie.  She came by my workplace yesterday to say goodbye. I have known her for many years, all of the years that I have lived in NYC now.  It was sad, afterwards, to have seen her so quickly, only to say goodbye one last time.  This feeling was, of course, heightened by our impending leave of New York.

There is nothing that can be said about it, really.  Everything is changing for us and Kylie's leaving brings it all to light.  That and the fact that our apartment is filled with boxes, mostly still empty.  The day after tomorrow the apartment itself will be empty. By Friday Rachel will be gone and I will be sleeping alone in an even emptier apartment.  No wife, no dog, no furniture.
It is fitting that I should leave the apartment this way, the way that I came in. Or perhaps I am just lazy and want to go back to sleep.  Maybe I am still just wallowing in the bittersweet melancholy of Army Whorehouse's death.
I'm not sure what it was that I thought I would become when I moved to New York but I would be lying if I now claimed that I was satisfied with the totality of the results from the last 12 years.  I had thought that I would somehow be more. Though I am not disappointed at all with the things that I've done.  I guess it is just that: that my experiences, though rich, did not build one upon the other.  Instead they tended to repeat.
I have a friend that can only talk about himself.  He also reads this blog occasionally.  He must sometimes giggle at my inability to talk about much else other than myself.  I know I would...
My wife wants to leave behind in NYC every single domestic thing that I have ever bought, been gifted, or was ever left behind for me.  I suppose that is the way of things, the witchcraft of love.
Even though our apartment is the size of a shower in a reasonably nice Mexican hotel we must leave most of it behind.  It makes no sense to bring.  Of what use will an aging toaster oven be? Or a broken unpainted corner table that I've had for years, bought from Ikea.  Old shelves, new shelves, mattresses that we've intended to replace, shower curtains, bent spoons, rusty razors, broken lightbulbs, bbq sauce, bacon, butter, and old butter knives....
After all of these years I realize that I still basically only own books, records, and clothes.
Once I remove a shelf in the living room, with records stacked on it, then I will see something I have not seen in over 10 years: a brick wall that was once a fireplace, when those things were still allowed here, when they were still needed here.
Once the apartment is empty and Rachel is gone I will be tempted to open a yoga studio here and teach my unique life-vision of love and centeredness...
Of the picture above, I have but a minor correction: Helena's right hand is not really as big as it seems in that picture.  I mean... it IS very, very big, and unusually hairy, but not THAT big.  The picture misleads,  it must be faulty optics, etc.  I airbrushed out the many layers of dark arm, hand, and thumb hair that she has had since early childhood but was unable to adequately correct for the size of her index finger and thumb.  She's my buddy though and it is my job to protect her.  So please overlook this physical aberration of hers.  It would mean the world to me if you did.
If you notice her left hand it appears to be perfectly normal.  Try to focus on that one.
Ok, Jesus, I have to go. Rachel is telling me not to post any of this and she wants me to box up my entire life and entrust some convicts with it as they make their way across this wide nation of voters... heading west, to the last frontier, towards our most famous prison...
To live astride the San Andreas fault, we go.
.
Posted by Sean Q6 at 5:57 AM