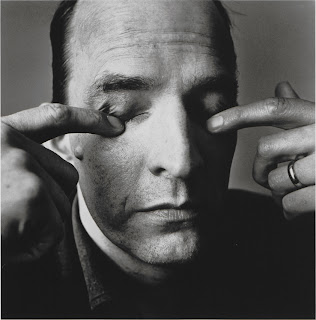 (Ingmar Bergman, photo by Irving Penn, 1964)
From Mary Shelley's Frankenstein:
I feel exquisite pleasure in dwelling on the recollections of childhood, before misfortune had tainted my mind and changed its bright visions of extensive usefulness into gloomy and narrow reflections upon self. Besides, in drawing the picture of my early days, I also record those events which led, by insensible steps, to my after tale of misery, for when I would account to myself for the birth of that passion which afterwards ruled my destiny I find it arise, like a mountain river, from ignoble and almost forgotten sources; but, swelling as it proceeded, it became the torrent which, in its course, has swept away all my hopes and joys. Natural philosophy is the genius that has regulated my fate; I desire, therefore, in this narration, to state those facts which led to my predilection for that science. When I was thirteen year of age we all went on a party of pleasure to the baths near Thonon; the inclemency of the weather obliged us to remain a day confined to the inn. In this house I chanced to find a volume of the works of Cornelius Agrippa. I opened it with apathy; the theory which he attempts to demonstrate and the wonderful facts which he relates soon changed this feeling into enthusiasm. A new light seemed to dawn upon my mind, and bounding with joy, I communicated my discovery to my father. My father looked carelessly at the title page of my book and said, "Ah! Cornelius Agrippa! My dear Victor, do not waste your time upon this; it is sad trash."

Excerpt from the next chapter (do your own research... it's early in the book):
After having made a few preparatory experiments, he concluded with a panegyric upon modern chemistry, the terms of which I shall never forget: "The ancient teachers of this science," said he, "promised impossibilities and performed nothing. The modern masters promise very little; they know that metals cannot be transmuted and that the elixir of life is a chimera but these philosophers, whose hands seem only made to dabble in dirt, and their eyes to pore over the microscope or crucible, have indeed performed miracles. They penetrate into the recesses of nature and show how she works in her hiding-places. They ascend into the heavens; they have discovered how the blood circulates, and the nature of the air we breathe. They have acquired new and almost unlimited powers; they can command the thunders of heaven, mimic the earthquake, and even mock the invisible world with its own shadows.
.
Posted by Sean Q6 at 12:51 PM