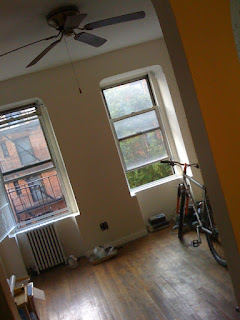 It is an odd feeling, knowing that soon I'll be moving, not knowing exactly when, just that it is happening.  Picking up my life and moving it to another coast.

I've lived in this apartment longer than any other place I've lived my entire life. 12 years.  It has become so much a part of me that I have a difficult time imagining elsewhere.  It is odd how a place begins to occupy you, becomes a part of your psyche, becomes the self.
I walk around my apartment, looking at the things that have accumulated here, thinking of what the apartment has been for me, how it came to represent my idea of who I am.  I had slowly become a part of an older vanguard here, though admittedly not by much.  A friend of the village.  I have become a familiar face among many.
In New York an apartment might only be a guard against the noisy confusion, but the door locks and then you are on the slightly less noisy inside.  It can be as solitary as the self, at times.  The crazy, dirty, exciting world is just down the stairs.  Sometimes not even beyond the front door.  It both drifts and leaps in through the window with its urgency.
Sharing a small place with somebody else adds yet another dimension to it.  It is sometimes strange and difficult to let someone else inhabit and occupy that private space.  There was a long period of adjustment.  It took much perseverance to move stuff away to a storage unit, to padlock it up.
------
Well, I had woken up last night and jotted down those observations, sleep already gripping my thoughts, robbing me of clarity, purpose.
I found the pictures, taken with an iphone, of the apartment when it was emptied to be painted, when Rachel moved back in, only a couple of years ago. Even that seems a lifetime away.  More years in distance than is possible, yet I know it is true.
The years fly by but then events from the past don't seem as far away as they used to.
Like an apartment, you don't realize how big it is until it is empty. Or small. 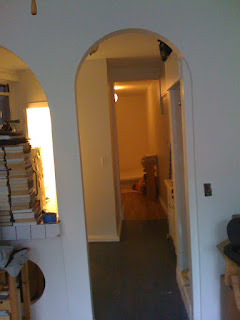