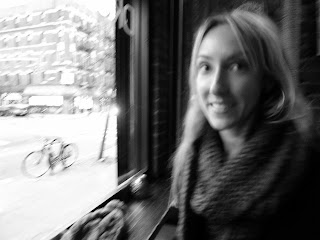 (Female creature, soon to be in transit)
Well, everything we own is packed up and in pods heading west.  The apartment is empty, sort of.  No matter how much stuff we move out there still seems to be more of it left over. Spontaneous generation, etc. There is a set of Encyclopedia Britannica that did not make the cut.  They have been on the closet shelf for 2 years, on the record shelf for 8-9 years before that.  I bought them on ebay, cheap.  I convinced myself that I could just do the same again when I get to Sonoma. We'll see...

Tonight is the last night that Rachel and I will spend in the apartment together.  There will not be any silly all-night sex, or many empty bottles of red wine to throw out in the morning, or cigarette butts to clean up. It will be a night of watching movies off of the computer and eating ice cream.  The days of crazed drug benders and nocturnal music sessions are over.  She is 17 weeks pregnant, which has curbed our craziness considerably. Hers it has ceased altogether.  Well, that type of craziness anyway.
She possesses a new sense of craziness now, a more boundless brand of lunacy.  It is difficult to explain, impossible to predict.  No simple words can breach it.  I try and try but nothing, it seems, can be done about it. Most of all I have noticed that the simple words that we used to use to communicate no longer have any effect whatsoever.
I often hear women talk of the sacrifice and pain of pregnancy.  It is not as often that you hear about what the man endures.  I now look at any man with children and know that he has silently suffered all manner of confusion and duress. He has lived through accelerated and unpredictable times.
This is not to say that a woman's sacrifice is not substantial. Some would say that it is perhaps even greater.  I have watched my wife's body change forms suddenly, growing and morphing into this other, strange new character.  Soon she will separate into two creatures, I'm told.  Only in science-fiction movies and nature does something this bizarre actually happen.  It's been said many times that it is magical and like nothing else that I will ever experience.  The idea of an animal changing forms suddenly and then splitting into two beasts sounds monstrous to me, but what do I know... my last experience with it was many, many years ago, well beyond memory.
I was told that I arrived into the world screeching.  So I must assume that the experience is not all just pleasantries and magic.
Ok, I promised my wife that I would wrap this up with something beautiful... 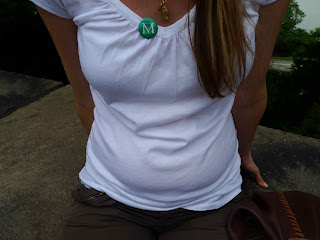