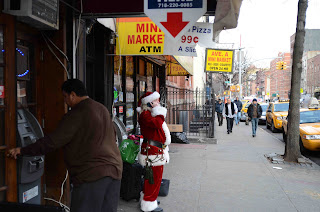 (photo of my friend, the educator, looking for work)

I have been forced to learn things since my last post.  One is that by having a free Google blog then a Picasa web album was automatically created for me, one that has size limitations.  I had just been assuming that Google had been downscaling the size of the photos as they are not available in full size from my blog.  Since then I have discovered that I can easily access my Picasa web album and downscale them myself, though this is painstakingly slow.  In this process however I have discovered that I can see the exact number of times each blog post has been accessed because there is a number below each picture telling me how many times it has been viewed, another budding sickness for me, one more sad obsession.

I was going to have to turn this site into a donations-funded institution.  I still might.  Calls came in from both coasts with offers to support the site. These kind souls were prepared to make personal sacrifices to pull this blog back from the brink of financial failure and final degraded ruin. If I were to lock those potential patrons into a binding contract I could have made as much as 10 or possibly 15 dollars a year.  Something fiscal to think about.... Make no mistake, these are tough times.


The strange thing is that Picasa seemed to be automatically downscaling the photos from one of my cameras but not from the other, up to a certain point in time.  So, now I will have to go through and perform the function manually using their primitive editing software, picnik.  It is painfully slow and rudimentary, which is perfect for me in the latter way, but abysmal in the former.

But the good news is that seanq6spot will not be relegated to internet stasis, yet.  I owe it to my 3 paying readers.

Based on my calculations, and my newly found navigating knowledge of the vast seas of the internet, I don't think I'll have to seek donations to keep this site alive for at least another year, possibly more.  But I have learned my lesson.  Never assume anything, and avoid paying anybody any money, no matter how much time it costs you.


Those are my words of wisdom.
I pray that they serve you well.