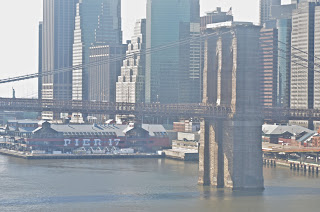 This morning we're going to have an adventure if we can get out of the house.  Writing this post won't help.  We were given tickets to go see the Edward Hopper exhibit at The Whitney.  I hate The Whitney.  I imagine that people who live in Paris must feel the same way about The Pompidou, though I'm uncertain about that.  Perhaps the good citizens of Paris cherish The Pompidou as they do their wine and cuisine, with utterly unrestrained indulgence and enthusiasm.  That is the Paris of my imagination anyway.  I have never been able to understand how they eat the way that they do and remain thin.  I'm convinced it is moderation alone.  Can there be such a thing as extreme moderation?  If so , then they must possess it.  It is infuriating.  I've gained a pound and a half just writing this paragraph.

If you look carefully at the picture above you can see a miniature Statue of Liberty, that famous gift from the French, crossing the Brooklyn Bridge.  It must be going to Grimaldi's then to the park on the far shore.  Even statues must need a weekend day off at times to lie around and drink wine in the park with their statue friends.


All that it takes to recognize why one doesn't sit around their apartment on a Sunday morning and listen to Genesis is to do so.  I had forgotten how bad much of their music was.  It's as if Rush got a fat, bald, midget Michael Bolton to be the lead singer of their band, then went on to release a string of obnoxious tracks that make very little distinction between the verses and the choruses.  It's as if the song only exists to advertise and echo its bland chorus.  Somehow I always knew their terribleness would eventually find its way back to me.

It finally did this morning.

Actually... as soon as I wrote the paragraph above the song "That's All" came on.  Some credit where credit is due...  That track is brilliant.  I suppose I am a closeted Genesis fan, I guess.  What an abysmal secret to harbor, an even worse one to confess.

Yuck, then "In Too Deep" came on.  I'm not going to provide a link. It's that terrible. It sounds like Simply Red but without a hook.  Okay, here's the link.  See for yourself, but you've been warned....

I have some punk-rock associates that will never read this site again after those last two paragraph fragments above.  I will get ridiculed for months over it.  Listening to Genesis on a Sunday morning wondering if the wife and I are going to go to a museum... Ah, adulthood.  Here we come.... Griswolds.

Phil Collins recently announced his retirement, but then retracted it, then his agent denied his retirement, then he asserted, announced and then rescinded it all once again...  I was following it only because I'm a media pervert with an internet fetish.  But it struck me as hilarious that nobody had even known that he was still active in the music industry. If they ever thought about it at all then most assumed, and rightfully so, that he had stopped exporting his monochrome form of misery decades ago.

Even funnier: He is apparently an amateur expert on the Alamo.  That's right: The place where the Mexicans kicked America's ass in San Antonio.  Now:..... P. Collins is from London.  You do the math.

Peter Gabriel must be rolling over in his gravity ball laughing.

What the hell am I talking about this morning.... Genesis sucks.  Phil Collins somehow even bested them in utterly uninspired crass commercialism.  P. Gabriel is somewhere happily dreaming of floating above a rain forest in a rubber thought bubble, silently saving it for future generations as he goes.

You can almost hear him singing.... And in this proud land we grew up in.....

The Lamb's Been Run Down On Broadway.