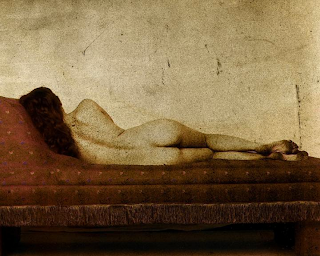 (photo used with vague permission of the artist)
Too far?  Probably.  I snapped.  I'll admit it.
Some truths can only be heard from overstatement.  So rather than repeat myself more often that necessary, I opted for "the best defense"... Though overstatement often generates some confusion along with it, the shock of the unnecessary.

Writing is an act of sometimes intense self-consciousness.  Writers are customarily a miserable collection of people.  I've only known a few published writers and nothing that they had published did I think was very good.  But I've known hundreds of unpublished writers, of all sorts, and they are a twisted and wretched set.  They will repeatedly try to draw conversations into their closed and claustrophobic perspective of the world. They speak in rehearsed phrases, failed fragments, or from the stolen lines of other, better writers.
They will habitually try to best you with their knowledge of writers' names and works.  They don't seem to notice that their name-dropping is a turn-off for others, almost as much as when they discuss their writing openly to a disinterested and unsuspecting victim. Or worse, they see their knowledge of writing being a turn-off merely as assured self-validation. They view it as an evident indication of their superiority and largess.
I should know.  I was like this for many years.  I assumed that the world would want to know what I knew, and what I thought.  I suppose I still do, hence this site.  But people who are consumed with literature have this special sort of condescension that assumes not only the ignorance of the listener but that the listener would desperately desire to trounce this ignorance if only they were made aware of what the speaker is clearly aware of, and has been for many years. Oftentimes early childhood is when they first dipped into the masterpieces of world literature, you know, usually delving in from the native tongue....
When I say that they are miserable I do not mean that they lack humor. Writers are often the funniest people I've ever met.  Pain is the source of much humor, especially the self-inflicted variety. If they're not always able to be funny themselves then it is oftentimes just as easy to have fun just listening to them. Again, intense self-consciousness routinely produces humor, one way or another.
So, writing... no other art-form suffers as much at the hands of the amateur.  Just look around.
See?
The image above has been treated and only resembles the original, but the photographer was unable to find the source image.  So I tired of waiting and used this version, which is a screen-shot from an online show of his that can be found at this site. The online exhibit is called Lonsomeville, but I encourage anybody interested to look around the site for other pieces as well.
One day he will print, sign and date this piece, then send it to me as a gift.
.
Posted by Sean Q6 at 8:58 AM