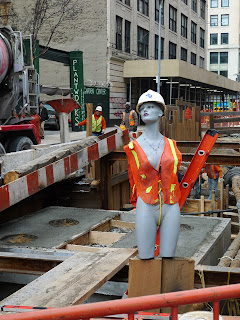 Another work of personal fiction:


I just don't know.  I think that I have finally become, once and for now, sick of it allah, once again.  I walk around New York and it occurs to me, in ways over and over anew, nothing new is ever really built for me, or by me. It is built to keep me out, sort of.  It has an irresistible way of being magnetic to any revenue that I might have accidentally accrued. It soon enough sorts and separates me from it.  These grand things are built to facilitate a level of trade diligence that either doesn't cater to me, or is vaguely hostile to me. Though this production vigor is somehow always attractive to what might have been mine, whether it be time or money or, oh lost bright coin, whither thou goest...


There is so much skyblocking wealth, at all times, and in all directions, high above one always in New York, that it's easy to understand how this city appeals in basic ways to people everywhere who see in that rise, that perpetual erecting upon aging erections, the echoes and representations of their own cultures.  It can be seen reflected in the glass buildings, across oceans.  It is the culmination, the climax, the pinnacle... the nation, the max, the manacles of minds forg'd....

Gonad, young man.  But go west while you can.


I don't know, just.... I feel tired and crazy and loose in my mind describing it, denouncing it, living it, allowing it, accomplicing it... and there is so much pressure to just be a silent and quite accomplish, even by those who you might have thought were most against it.   It turns out that most of us were not revolutionaries, we never even turned around, much less revolved.  Or if we were, then we radicalized ourselves so far into an unknown misunderstood underground as to be insignificant, unseen, silent, or worse: poor.  But not impoverished, and still with ideas, quantities and qualities lost and drifting in blind orbits, helpless though not alone.


The barely noticed revolution that has been taking place is the collective and willing triumph of media ignorance, the mistrust of intellect. It's the conquest of industry over inspiration, of data over meaning, of witness to judgement, of story to spin, of intent to action, of awfulism.

The dual lures of abstraction and analysis, the perpetual incompletion of sustained thought, the reduction of mindful contemplation. Subjectivity supreme, where partiality and preference dissemble as an indivisible whole in the place of content and form, in the place of art, of living.

There exists now only entertainments, with hardly any pleasures left.  I am at all times surrounded by the evidence of it.  It solicits a drowsiness of the spirit, and then invites the deadening agents; the intoxicants, the endless azure pleathers.

To the comforting cult of the new high market, I pray.

When did ignorance become a point of view, and worthy of defense? I blame Oprah Winfrey and the talk-show culture of our time.  Once we accepted the idea that everybody is worth listening to, then we were forced to do so, endlessly.  It is a short and easy step between the assertion that: everybody deserves a vote, to: everybody deserves to be heard.  Ideas are not democratic, they are imperialistic. Some ideas should be valued and heard over others.  Some ideas defeat others.

Doctrine is not thought, but rather a retreat from thinking, thinking reveals this, and thinkers will naturally resist it.  "Policy and Procedure" is the corporate version of doctrine, and they are often used as articles of enforcement and uninvited change.  Once you hear the dual cadence of blind compliance, "Policy and Procedure" then run... and run as fast as you can.  The marching drums are coming.... the meter is beaten for you.... Especially when they tell you that, the policy is changing. That means that they've just changed the accepted deal on you, and the hammer is swiftly coming down, in time. Because a change in policy hardly indicates an increase in pay, or any other improvement, for you.  It means that you just got demoted.

Save yourself if you can't save others.

Fuck, save me... save Charlie Sheen and Sarah Palin from themselves, from us, for us, from Forrest Gump.  run, fire, Fire, FIRE.


It is late, and I am tired, and have had a very rough week, or more. I have had years of rough weeks.  Lack of sleep, lack of meaning, and loss of understanding, and then enforced sycophancy, in ways I am not currently able, or at liberty, to describe.  I won't bore you with the details, but rest assured, my life is bowing to a new god, and not one of my making. This new god is not a god of benevolence, understanding, or mercy.  It is a hostile old-testament-style-god that must have been edited out of the later, secondary drafts. It neither respects life nor limb, nor gardens, nor fruit.  It is rapacious in its unending desire to devour.

We did not get kicked out of the garden of eden, we only went there to weekend shop, and as it got late, the mall had simply closed. We got gently blocked by garden security, dressed up for the occasion as sentinels of liberty, the marching statues of...

I too have snacked lightly from the food court of knowledge, you know?

The mannequin above and below...
in lifeless, limbless, slow naked non-being.
In orange uprising, and continuation,
It has alerted, and signaled, and protected me so....
a construct really should, shouldn't it though...?

So, give me your tired, your poor, your huddled masses.... I'm in the mood to fuck. 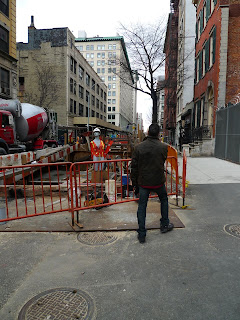