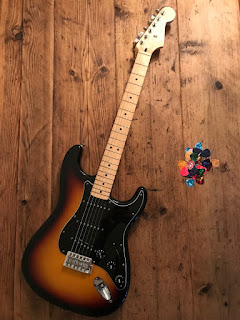 I had an old Stratocaster lying around in its case for years, two decades. When I pulled the white pick guard off the other day to replace it with the newly purchased black one the date on the inside read May 22, 2001. So, almost two decades. It was bought new for a studio project I was doing with a few other people - electronic dance music - I kept it since I could play better than any of the other DJs.

The boy has been interested in it lately. He wants to plug it in and make some noise - bang on the drums and call to the gods, the primeval susurrus or full-throated roar of rock-and-roll. I do not wish to overstate the importance of me swapping out the pick guard and changing the strings on this guitar but it's much bigger than The Clash's first album.

Well, we'll see. I do like the look of it more than the white. Mom said this looks more "rock and roll," and the other looked more "country."

Here, you tell me: 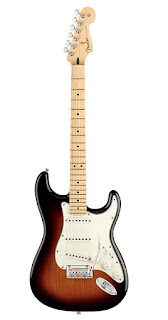 I don't care that much either way, but I was bored and it gave the boy and I something to do for an afternoon. He seems to like the black better, so there is that. The guitar will be his in a handful of years here, so what the fuck... I haven't plugged a guitar in to an amp to play it in many years now. When I bought the official new black Fender pick guard I also bought strings and a bag of 60 picks. I'm so fucking ready to go on tour now. I'm ready to play Camden, Reno, or maybe Stockton. Work my way up towards San Bernardino or Shreveport. Maybe all of them. All original material, all made up entirely on the spot. I wouldn't have it any other way. Rock opera, it's a real tragedy. Buy a van, a new bong, and maybe a clean t-shirt. We'll see where it goes.

Are we allowed to post music from our moral and spiritual inferiors?

If so, this still exists:

Being a fucked up rock star that tries to fuck young and possibly impressionable girls doesn't remove your recordings from the universe, but they're working on that.

It's out there in some new perfect tomorrow.