When We Were Fabio 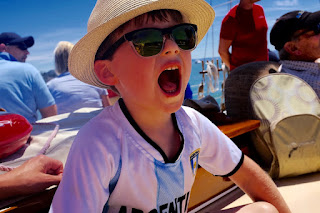 Well, I was able to get the boy's mind off death for a bit by taking him to see Finding Dorky, an animated Disney film that concerns itself with both the real and imaginary terror of losing and re-losing your parents in an impossibly large world, though admittedly one that is less hostile than we know the real one to be. Most of the action took place on land, somehow. The boy seemed to like it. He had Burger King for the first time on the ride home afterwards. It was late and he claimed to be hungry, so that's what happened. He was so excited about it he called his mom to video chat to tell her all about it.

Her excitement was also palpable.

I chose BK carefully, not based on the quality of the food of course, but on the scarcity of their franchised existence near us. So, even if the idea of King Burgers takes hold of the defenseless boy's imagination there will be limited access. At best, he will become a junky without junk food.

We do try to feed him healthy food, I swear it.

Okay, the day is already wide open in front of me. I will go for a bike ride up the valley to Kenwood. A herculean uphill effort. The last time I did it it seemed as if it took me about two hours to peddle there and about fifteen minutes to coast home. The entire way back today I will hum through the only verses of "Ride Like the Wind" that I know, my remaining cilia-like head hairs trying to negotiate the advancing wind, a school of sensory organelles fighting to stay attached to their host, my skull functioning as the Great Irish Barrier Reef.