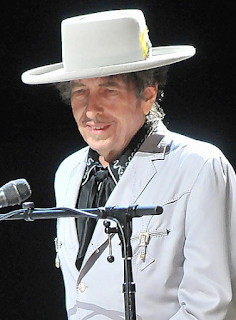 Dylan was much better than I expected. He stuck to mostly new material, which suited him well. Even when he threw a newly arranged rendition of "Blowing in the Wind" into the end of his set it didn't bother me much. How many fucking roads must a man walk down… Indeed. I didn't have to slap a lighter out of anybody's hands, which was lucky for all involved. His piano playing was festive and vibrant, made it easier to detect that he hadn't died between songs.

Dylan looked as if he stepped right out of a Werner Herzog remake of Zorro. He shambled around the stage like a scarecrow, ever in danger of a breeze blowing over his entire costume with him included, a tailored tumbleweed. His entire operation looks like it weighs about 40 pounds with guitar included. Bob Dylan and Carlos Santana are slowly becoming the same person.

Cato and I had a pretty good time laughing along with it all. I had melted a Herculean dollop of pot butter into a Moroccan mint tea before driving in to meet him, then there were a few glasses of wine. Things steadily devolved into various states of nonsense.

We tried to eat some McDonalds french fries and a cheeseburger after the show, like kids do, but only the fries were edible. The cheeseburger tasted like a warm band aid. Whatever they do to those french fries is illegal. It must be.

He did do one of his older songs in the early part of his set also, which was good and got people up out of their seats to sing along:

You will start out standing, proud to steal her anything she sees

She never stumbles, she's got no place to fall