Patchouli for you to say 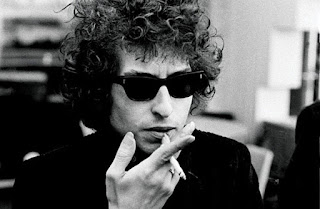 Cato and I go to see the mighty Bob Dylan in Berkeley tonight, the Greek Theater. He texted me yesterday with news of tickets still being on sale. Dylan didn't, the other guy, Cato did. So, we acted like members of the Bay Area tech community and paid lots of money for something that hippies used to be able to afford. I'm going to wear something expensive and be giving out lots of "peace signs" and fine, big free smiles tonight. Maybe bring one old half-chewed hacky-sack and give it out to a hairy beggar, asking, Is this what you need?

Not everything the hippies did was wrong. There are lots of leftovers wandering the woods up here and north of here. You see them every now and then in their fresh tie-dyes, shopping on the weekends, trying to procure the necessities for their chosen lifestyle. Lentils, probably. I'm sure that some of them will be creeping out of their stale bong water for tonight. They are all semi-amphibious.

Dylan looks like a corpse that has had far too much current coursing through him for far too long. He's like one of Dr. F-steins early first efforts. I'm going mainly because there is a reasonable chance that history will be made sometime very soon. After Prince and Bowie, I've been buying tickets for anything that is John Prine and up. Putting all my money on black, etc.

I joke, of course. I wish the end on no one.

I had a pretty good time during the Bill Clinton years. Many people did, I think. They were all near my age and we were all much younger then. A perfect storm, that has rained down the torrent of middle-aged friends.

I look ahead now to what will hopefully be the Clinton years again, because I want her to have the nuclear launch codes. I mean that. If it is a choice as to who will have them between the two options, I want them to be with her. I understand that Kim Jong-un feels differently, and his voiced support is with the other guy. Not that Hillary is a guy.

No matter what happens, when it is all over, I will still want there to be a female president one day.

It will be funny, either way, to watch either of those two win. It will leave half of the country in a wild, desperate state. I mean, a real kerfuffle. America suffers like any similar nation, from having two languages, both sides still believing those to be black and white.