The light that never lands 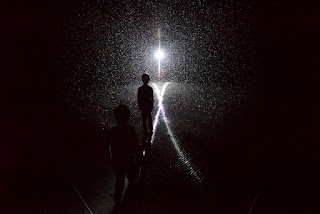 The image reminds me of the album "Los Angeles" by the band X, for no reason beyond the obvious. Or, "Wild Gift." Their first four albums were freakin' monsters.

It also reminds me of the poster for the Donald Sutherland remake of Invasion of the Body Snatchers, or perhaps a scene from Close Encounters.

I have been listening to Black Uhuru for a week now, particularly the album "Red." If you're a fan of reggae and not familiar with this album then you should check it out. Here is a little retrospective review of the two producers of the album, Sly and Robbie. The 80s are still an enormous reservoir of music that I am barely, or not at all, familiar with.

It has been a lazy morning spent with the boy and his buddy at Rebounderz, the injury factory. It is a warehouse filled with trampolines. Each time that we leave in our own car rather than an ambulance I am grateful and offer a silent prayer to the gods of injury. He's never been hurt there at all, but it requires little imagination for the parenting gene to kick in and take over, transforming a normal human into an annoying wart of anxious fears.

When I left my apartment this morning there were a number of squirrels panicked, more than 10 of them, and they were all running across the parking lot, all in the same direction. I was certain that an earthquake was coming, but none arrived that I could detect. My nervous system is so shot that we could have slid into the ocean and I might have missed it.

Now, I lie in bed watching the day begin to disappear. There is an abandoned bottle of rosé in the refrigerator that should complement the last of the light that lands before slipping out for good into the great dark beyond.