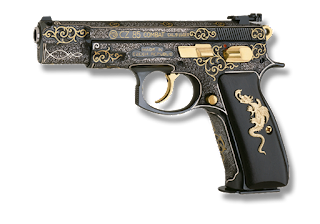 Ugh, I tried, started three or four times and can't get off the ground.

I've watched the gun argument unfold online in the familiar way and it still makes very little sense to me. It seems to be split almost strictly along the lines that those who own guns are for them, those that do not are not. Personal protection seems to be the argument that holds the most weight, understandably. That people need to protect themselves from other people with guns seems obvious enough. It is the argument that makes the most sense. That it rarely works out that way is not a part of the conversation that seems to matter, for reasons that can not be talked about openly and rationally.

I don't mean that the reasons are vague. Guns are dangerous and they are more often misused than well used, at least when the police are investigating accidents and criminal intentions. Yet even though the statistics show that people are far more likely to injure themselves or others, or to have their own gun used against them, still nothing.

I read something along the lines of, Once we allowed someone to shoot a bunch of children and we did nothing then we lost.

That those who own guns also seem to be the ones screeching loudest about others leeching off of their society... that, they're not putting anything in! seems to escape them. Nobody is willing to make a sacrifice to better the society they live in. They have the right to own a gun and they are intent on keeping that right, yet they also make the most noise about others not contributing, not doing anything to help. Not all of them, of course. Some of them secretly know that the "others" are the very ones that they might one day need to use their guns on. You know, the welfare crowd. It is only a matter of time before somebody walks into a welfare office with an AR-15, then the underlying essence of the conversation will become more clear for some. You'll see.

I almost want to buy a fancy gun to see if my feelings about having it will change, but you know, there is a child in the house, and all of my money has been squandered on cameras. I can shoot, just can't kill.

The thing that I love the most about gun advocates is their insistence that their guns are safe, they are all locked up with the "safety" engaged and only the owner has the key, yet they insist over and over that criminals don't play by the rules. Few arguments could be more asinine. If the proper safety precautions are taken then it renders the gun even less useful than it might have been otherwise.  None of this seems to matter much, it is safety upon safety. You know, the rapiss and killers of the world enter a house with a portable gun-safe, announce themselves, unlock the safe, assemble the gun, load it, disable the safety, put the key away, then conduct their mayhem, etc., etc., etc...