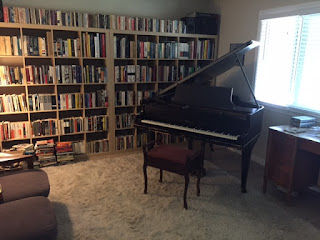 I finally moved the piano in. It cost more money than I would have cared to have spent, but how many Irish-Mexicans do you know with a grand piano.

Nothing connects Rachel and I any longer, except that I recently borrowed her vacuum cleaner and that we have a child together, and then a smattering of legal documents.

All that, and she offered to give me a ride home from surgery on the 27th. The pain has finally become too great. I know many of you have wondered what is wrong with me. There is nothing really wrong, it is only that I was born of a woman.  I'm just as god made me. I am going to show the courage to announce this to the world, then have it fixed.

The Goddess was wrong.

Vanity Fair has not yet shown much interest in my story, even less the selfies I sent them. I emphasized that I watched the '76 Olympics in Montreal. Well, I did not watch them in Montreal. I watched them from a suburb of Orlando, on television, but that was my choice as a child and I have the courage to say so.

I think Caitlyn's middle name should be Monty.

Or, Monty Python. Or, Gold-Mettle.

It's nice, this progress, that they now offer an operation which allows me to change my dead mother's gender and sex. For another $500 I can change her name, though I'm still working closely with the Mormons to have her baptized after death under both names, Stella and Helmut, together in eternal bliss.

The Mormons have their standards, some say too many.

Now, mommy can assume her rightful place as part of my daddy issues. Just a quick slice, snip, tuck, some dissolvable stitches, a year's worth of pain meds, and voila…. mommy is neutered.

Fuck... I wish that I had Jesse Christ's Girl. This is not what I meant to write about today.

I had a victory yesterday that should never have needed to be described as such, and at much greater cost to myself than the piano and with far less joy.

It all started with a phrase like this, Will you marry me?

Well, in truth it started with the answer much more than the question, if you will.