What you see is what you get 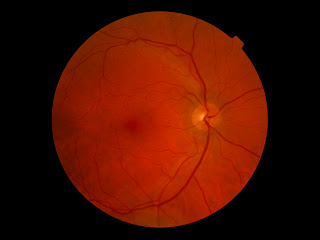 I went to the eye doctor yesterday before driving into the city. I had lost the pair of glasses that I got just before leaving NYC. I had been using my original first pair, from about 6 years ago or more.To my surprise he said that my vision hasn't deteriorated very much since that first prescription. So, he gave me a new one and I looked at a few frames, but left before deciding on a pair. I was in a feisty mood. I thought it best not to make a decision while in that state.

I was asking the doctor all sorts of questions about vision and he said that there is much that we simply still do not know about it, about how the eye converts photons into what we think of as objective external reality, or at least our perception of it.

I corrected his vision test for him. This is true. I swear it. His monitor has some light falloff on the peripheries and the test was not quite centered. I noticed these two things and pointed it out to him. He was visibly shocked, told me that he'd have it fixed promptly and thanked me for noticing. Nobody else had. This came about because he could not understand the slight difference in my ability to see and read aloud clearly the last of the lines, but stated that I could see the left side slightly better than the right. It made no sense to him. They were on the same visual plane.

It was not necessary for me to then explain what an enormous nerd I am. It filled the room.

What you see above is a picture of the inside of my right eye. I had been told previously by an eye doctor in NYC to never post publicly such an image, that a person's eye is as unique as their fingerprint and it might be possible for those who wish to engage in identity theft to exploit the use of the image. My doctor yesterday scoffed at the idea, that anybody would possibly wish to possess an identity such as mine.