No matter what they say 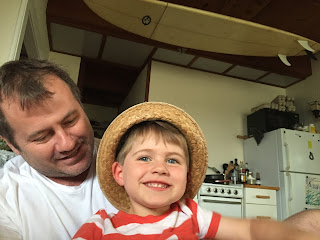 Fathers Day with the boy, yesterday morning. We went to breakfast and then on a spending spree in the toy section of the Dollar Store. We got about a month's worth of junk for $25. Being a single dad is tough some of the time, and loneliness does not seem to help. Yesterday, I felt lonely again. When I dropped the boy off at his mom's house she looked prettier than usual. I wanted to kiss her, but instead opted for a goodbye hug, the first in about a month. Sometimes it is useful to recognize that this relationship failure has hurt her also, that she's just a human, flawed in her own ways, but still a creature deserving of love. Not mine, but someone's.

I did as I promised and took a nap yesterday afternoon. It was really much more than just a nap. It lasted six hours. I awoke with my shoes on. I had only thought that I would rest my eyes for a few seconds. I suppose they got their much needed rest.

The grand piano arrives here in my apartment on Thursday. It is the last item between us that has yet to be moved, to make the physical separation complete. It's a monster to do so, $400, then $200 for tuning. It'll be nice to wow all of my Mexican neighbors with my musical prowess. I'll keep asking what their favorite Billy Joel songs are. If they have not yet decided what their all-time favorite song of his is yet - it is so difficult to choose - then maybe I'll learn Somos Novios and wow the local housewives with my passions.

My abiding love for Christina Aguilera is already well known here in the barrio, through my touching and tender guitar rendition of Beautiful. But I really should build my repertoire.


To all your friends you're delirious
So consumed in all your doom
Trying hard to fill the emptiness
The pieces gone, left the puzzle undone
'Aint that the way it is...