To Feed a Hummingbird 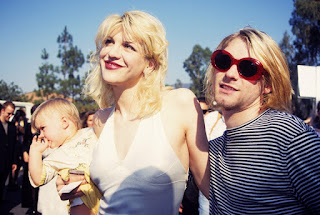 Well, no ornithologists read here, we've now established that. A few days ago I referred to a hummingbird feeder in which the birds could leach off of the welfare system of free seed, forgetting that hummingbirds do not eat seed, but survive on nectar and insects. So, my newly arrived hummingbird feeder will be stocked with a solution of sugar water, I think. Exciting times for the boy and I though, to have a little project to entertain ourselves.

There is also the cold sake with which to contend. I will make contact my true sumo spirit.

I can hardly keep my head up at work today. last night I stayed up late and watched the first half of "Kurt Cobain: Montage of Heck" the documentary about the self-demised rock star. I made it up to the point where the band is achieving their biggest success, the release of Nevermind. Things are gettin' cray-cray for Prince Nervosa. I look forward to the second half, even knowing where it ends, and how.

I had an idea of him being an unloved child, but the wealth of childhood footage tells another story, though a surplus of footage and pictures of your childhood do not necessarily fill the empty crevices of the heart. The sense of being loved is not so easily sustained. If only…

As for the loneliness of another's heart, none can rightly say.

The hummingbird feeder has a built-in ant moat, sensibly.

One of my favorite anecdotes is from Jacques Barzun: He relayed how a man was boring the room of a dinner party with his seemingly endless fascination with ant colonies. After claiming several times that they were like a highly efficient Army... a woman sitting across from him finally quieted him, No Navy I presume?

Wit is perhaps the only thing that I have ever taken seriously.