"All I know is that I could not leave her there…." 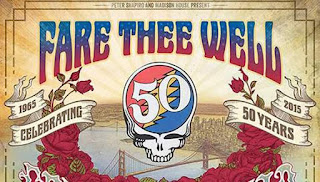 Well, the second night was as good as the first, possibly even better. Trey's funky and punctuated guitar playing suited the material more and he seemed to get more comfortable at playing counter-melodies. Also, they chose material that was a bit more obscure, overall, which made things interesting. There were no repeats from the previous night, yet there were still a number of songs I would have loved to have heard: Jack Straw, Dire Wolf, Ripple, Franklin's Tower, Friend of the Devil, It Must Have Been the Roses, China Doll, Deep Elem Blues, and on and on.. Many that may have required Garcia's voice to do effectively, etc. Here is the setlist from last night, for those with continued interest in such things.

I would have loved to have heard them do a short acoustic set. I left the stadium joking how much it was going to cost me to get to Chicago next weekend, asking around for anybody with a van. I'll just need to grab my sleeping bag….

I don't believe I've ever admitted to liking the Dead as much as I do here on this blog, but I do. I was at a work function and somebody asked me if I was a "Deadhead" and I wasn't sure how to respond. I said that I didn't really think of myself as one. I don't own any tie-dye apparel, or overalls, and haven't followed a band anywhere. I have never considered applying patchouli oil to anything I've owned except perhaps my lawn mower. They then asked me how many shows I had. When the answer came back at around "a hundred or more" then they had the answer they needed.

If you think you don't like the band then try this. I once remember my dad walking by my room and hearing it playing and asking me what it was. When I told him it was the Grateful Dead he said he thought that they were "acid rockers..." I told him that they used to be but they found Jesus and now they do mostly country tunes. Not sure if he made it to any shows, etc.

Anybody who knows the Dead knows how great they can be, but Bruce Hornsby is a phenomenal piano player and stole the show for me at times. Man, his playing was exciting, and his singing as well, particularly on Casey Jones. He did the vocals on a couple tracks both nights. Great stuff. To see anybody playing as happily as he was the last two nights was well worth the effort. Improvisational piano played with that sort of verve and talent isn't something one gets to see every day, though it should be.

Now, I await for my buddy to wake up. We will go get burritos, pull ourselves together, and begin the long, strange trip back home.

When I awoke, the Dire Wolf, six hundred pounds of sin
Was grinning at my window, all I said was come on in…