Indium Tin Oxide and the city across the bay 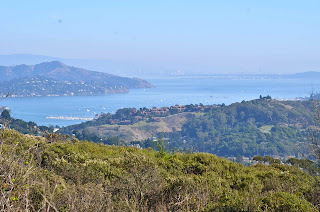 I spent a night in the city.  It was exhausting.  I drank too much, of course, then had to work the next day.  Perhaps all that I've said is true, that I am getting old.  I used to have boundless energy with which I could destroy my body and spirit. The spirit almost always bounced back, sometimes even with renewed vigor and enthusiasm for damage. Now I miss not being at home, sleeping in my own bed, awaking there in the morning.  My gypsy days are winding up;  would that be winding down?

I sat at my lunch yesterday and watched The World Series and drank two beers, wishing myself far away, at home, in bed, knowing that it would be hours before I would be there.  I don't normally drink beer on my lunch hour.  It never works out as well for me as I might hope.  But I needed something to give me the strength to go on, to carry myself forward.  My wife thinks that Albert Pujols has a funny name, especially when pronounced with the excited energy she possesses when doing so.  She says that it is not a real name, that it could not be, that it is from Saturday Night Live, like Turd Ferguson.  I assure her that it is not a comedy name, but a real one, that he is from the Dominican Republic, a great ball player.

She remains suspicious about it, and giggly.

Ever since I went to that bluegrass festival I've had some dust on the image sensor of my camera.  It can be easily seen in the picture above, as can the evil city across the bay, the one with the many problems.   I searched the internet for image sensor cleaning suggestions and options, all sensibilities pointed towards this rather expensive system, or so I thought. The system could be ordered from Calumet photography with a credit card.  So that's what I did.  When it all arrived I sat down with an instruction manual for my camera and read through the section on how to go about raising the mirror so that I could have access to the sensor, how and why to be very careful, etc., etc.
I read through the directions twice, wanting to be sure of the procedure.  Then I committed to the act and cleaned the dust off.  All was perfect.  I reclined on the victory couch and continued to read on from what I had thought was the end of the cleaning section.  On the very last page of the section there was a warning box, advising no one to use methanol in their cleaning solutions as the image sensor is of the indium tin oxide outer-coating variety and apparently will be damaged by methanol.  I'm sure you've guessed by now.... I was fucked.  I hadn't done enough research, or bought the right products,  or read the instructions all the way till the very end.  All was lost, $1200 for the body alone.
I jumped up and ran to the computer, to see if anything could be done.  I found nothing except warnings about doing such a thing, and why not to.  I was terrified.  After a few minutes of that I went to the Calumet website, where they sell the stuff, and there was a statement there saying that the solution was safe for tin-oxide type sensors. No further explanation, just a claim that it is safe.  I started thinking about quantities of liquid, ratios, flammables... trying to remember anything at all from science class, how to pronounce "aluminum" and that Brits claim they isolated it so they decide on its pronunciation, neither of which are true... they perhaps are confused over what an element is and what an alloy is, a mixture containing two or more elements, by definition, etc.
I was miffed. Indium Tin Oxide.....