If you don't complain... 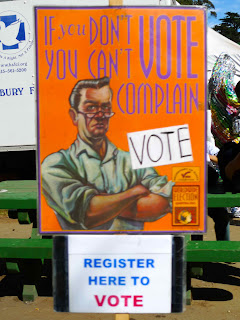 (Vote Complain, the people's candidate...)
The gods have spoken.  Late last night I was trying to add the new Wilco album to my iTunes library and the application froze.  I tried several times, several different ways, no luck.  I sent the album to my wife's computer and added it to her library, to make sure that there was nothing wrong with the files themselves. There was no problem there.  I began troubleshooting in earnest, not something I enjoy doing in my free time.

After about 2 hours of serious tail chasing I finally gave up.  I had tried many possibilities, each developing on the results from the last failure.  There is no hope.  My backup is corrupted, there seems no option, I must start fresh and new.  I have not lost any of my music, that I know of, so far... but the iTunes library file is screwed.  I can no longer write to it.  I can still continue playing the music that is currently in the library,  but I can not add any new music.
I will have to rebuild the library, possibly losing my playlists.  I haven't bothered trying to export those yet. We'll see.  There might be some glimmer of hope.
It is because of my comment towards the end of yesterday's post... I know it.  The angry Apple spirits are teaching me a lesson, shaming me.  Unlike Selavy's site this site is very much about teaching lessons, moralizing, opining, correcting, proselytizing, pontificating and extremely cultish in flavor.
I never wanted to be a cult leader, or if so then it was only for a short time, I was in a weird relationship, etc.  I always wanted to own an accounting firm whose client base was composed strictly of cults and cult leaders, a private boutique agency of sorts.  It seems a far better way to enjoy the many benefits of cult life without all of the apocalyptic talking and poison kool-aid...
The gods have spoken.
When I was at the Hardly Strictly Bluegrass Festival a few weeks ago I saw the sign above:  "If you don't vote you can't complain. Vote."  This is self-evidently untrue. It is possible that one does not believe in democracy or the democratic process, one still has the right to voice those feelings.  Or, what of those who have been convicted of a felony? After having paid their debt to society, having served their time, or having resolved their crime in whatever way the courts decided; do they then have no say in making their community a better place to live?
Can we not complain that there are no worthy candidates?
Selavy also mentioned the Wall Street Protesters this morning.  Do they have the right to complain of corruption, without voting? What if the candidates to vote for are known accomplices in the corruption, or worse?
And what of this colorful fellow below?  When I asked him if he was registered to vote he just looked at me like I was a delicious fly and he an inter-galactic pan-terrestrial mirrored rainbow space lizard....  Does he not have a right to complain?
The gods have spoken, and they are quite bedazzled with us..... they sent this reflective envoy here to disco us to ecstasy. 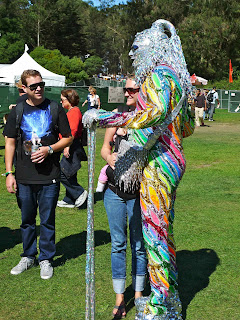