bi-planes in the valley 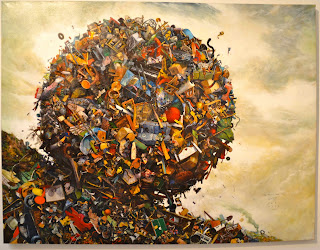 (Chester Arnold, Di Rosa gallery)
Last night, lying in bed with the wife, I felt the baby kick, twice.  When I say kick this time it really was.  It actually moved my hand a little bit from where it was rested on her belly.  It was a pleasant shock, overwhelming in its own way.
I've noticed that it's become increasingly difficult to write for this site.  When I am just inflicting pain upon myself then it's much easier to write.  It is a challenge to remain so self-involved with a baby on the way. There is a new subject in the room that is hogging all of the spotlight.

I have been trying to find a way to describe this valley without lapsing into terrible preciousness but so far no voice has emerged.  Each day I see something new, or the same thing in a different way. Each day I want so badly to write about what I've seen but the day passes and it all becomes a blur of beauty.  Last night as I was driving home there were four small planes flying through the valley, two bi-planes and two that appeared to just be older "classic" planes.  As they turned in unison they crossed the moon, as if in slow motion, the buzz of the engines making its way down to me, delayed.
The moon was quite large though not full.  It was a picture worthy moment but the moment passed too fast. The way to photograph this valley would be on foot or maybe a bike.  It is strange, in a car everything changes too quickly, on foot almost too slow to notice.
Tomorrow night will be the rising of the full Hunter's Moon.  It occurs pretty much at sundown (just shortly after for the East coast) so Selavy and I should be able to agree on it. I'll check with ABC and we'll proceed from there.
.
Posted by Sean Q6 at 8:39 AM