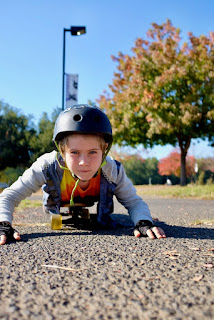 That kid that you see above is in big, big trouble. He became angry with mom yesterday morning, after I left for the city, and threw a baseball inside the house, breaking a terrarium she had made that was hanging in the kitchen. So, now he's on lockdown - no screen time, no baseball practice, no playdates, no bike riding, no fun.

I added him as a beneficiary to my 401k this morning. You just never know. For tax reasons, I should probably replace him with mom on all of that stuff. I normally have mom do all of that. Yes, I know... I should be responsible for my own life, but it bores me. I have never aspired to be an administrator or manager or principal or an executive of any kind. I hate even asking a person where they want to eat. Even the thought of asking a group that same question angers me as I sit here. The only time that I've ever liked groups is when they were cheering for me.

CS recalls a similar fondness for fledgling stardom this morning. There's my one true sentence.

Better is better than what is worse. That is my koan.


Jesus. I just ran out the door to pick the boy up and take him to baseball practice and then to the store to get some dinner. I had some thoughts and observations during that time that I was going to note here, but they have slipped my mind. I am a man of that age.

I did, however, ride my bike today. It was the first time in months. I have been getting fatter and drinking more, so my guilt pushed me into activity. It was a glorious day for a ride. There was that, which was good, and was enough, and was better.