Then this and then there 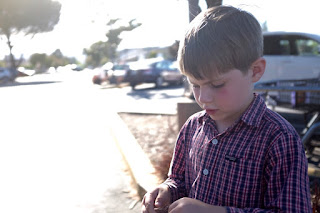 What should have been a day spent resting turned out to be half of that. The first half of the day was quiet and relaxed, spent mostly in bed. Then, I went to pick up Rhys... Whatever was left of a sick day turned into a trip to the grocery store, a ride home, watching the boy go swimming at the pool, a last minute text that there was a Cub Scouts introductory meeting at Sonoma Square, the drying off and getting dressed of the boy, a ride back to the square, the meeting itself where the boy would neither sit still, sit down, nor be quiet, then I was too tired to make dinner when we would have arrived home so I decided to stop at a pizza place called Mary's where he can make his own pizza and I could have some comfort lasagna, almost an hour spent there watching a barely post-pubescent kid try to manage the two tables he had to get water for and then give both of them a bill for the food and services provided, a nearly fifteen minute wait for that bill to arrive after having requested it, the drive home, a turnaround drive back to mom's to get the boy's medicine, home again, getting the boy dressed in pajamas, brushing teeth, getting him in bed, retiring to my own after he had gone to sleep, dreams of another sick day in the morning, prayers to nowhere that another day might unfold differently this time.

Speaking of dreams, I had a series of terrible ones last night. The last of them involved being kidnapped by Russian mobsters who were famous for cutting people's fingers off, leaving them with two bony nubs. Rachel somehow arrived late in the dream to help bring me back to America. The ransom had been paid but something went terribly wrong. I realized that we were both going to die after some unspeakably unpleasant things happened to us for the entertainment of our very sinister and humorless captors. I had no idea where our son was. Our kidnappers were of the worst kind. They would laugh at all the wrong times, at things that didn't seem at all funny.

I woke in a panic that didn't entirely dissipate upon waking.

It was that kind of a night. I haven't had a nightmare in a while. Mine are not usually so dramatic. My custom made night tortures have slowly become about the debilitating effects of compound interest, not usually quite as cool as Russian mobsters, but now I'm ready to go back to floating APRs swooping and screeching at me in the dark.