Do anything your heart desires 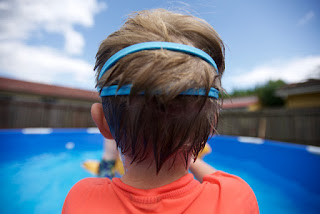 I wonder if I would be happier doing something else. It often seems that I might. Though, when things were handed to me, as they somewhat were when I was involved in music - being disproportionately rewarded for half efforts - I feigned superiority to the experience. I mocked those that "tried" because I developed the most perverse of beliefs: that I was special and deserved to be treated accordingly. I projected a belief to myself and those who cared to notice around me that I was above the things that mattered to them. That attitude was the likely cause for me leaving that world prematurely. Recognizing a lack of enthusiasm, they stayed away in droves.

I listened to an old "dj mix" of mine this morning, and then another one before that of far lesser quality. It has me a little rattled, that time continues to betray me. Time has no sense propriety, or decorum.

With a real job - both challenging and engaging - I tell myself that I have missed a calling, though with no real speculation as to what that calling might have been - a journalist perhaps, or a photographer. One of the liberal photo-jornalists from the early 1960s that lived the crazy life but got their work done and had the benefit of being in the right place at the right time, all of the time. Perhaps I missed much more than just a calling. Maybe I have lived in the wrong time, or too anachronistically, something that I can slowly reverse, though not for good.

The truth is likely closer to being content, writing and photographing passively. Part of my happiness arrives from experiences being unsullied with unstated expectations or demands.

I'm not sure how I became so spoiled, I did not come from wealthy parents, at all. It must have emerged from my reading of the lives of artists, writers, poets, and rock stars. They always seemed to believe that they were destined for a life of creative rewards, or at the very least they write about the moment that it happened as being "life changing." It becomes difficult to determine if success was the result of that belief, or if that is just a common belief for people of a certain stripe to maintain.

Or, maybe people that use hackneyed phrases like people of a certain stripe aren't the ones who eventually become writers.

I should fix this.

I thought that I would somehow do more than document the days' passing, that there would be time to... one day... There isn't though, there is the pleasure and pain of living life only, and we struggle to align more pleasure than the other. None of it has the least obligation to make any sense, or to become something else. I can see that now. It's just time passing, and you try not to fight it.

The weekend was spent in a soft spring and suburban glow. There were pool parties one day, a free day at the local warm springs the other.

I spent Sunday playing in a pool with two kids (one other than the one pictured here). Not once did I try to accelerate the day's passing, to see where it would go next, or to force it elsewhere the way that I might have the first forty-five years or so of my life. It's as if the clock's hand is being wound by someone else now, someone much calmer, someone that seems to be on my side. 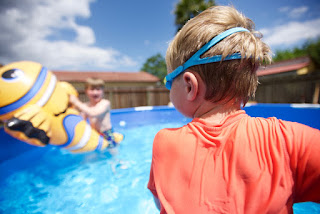