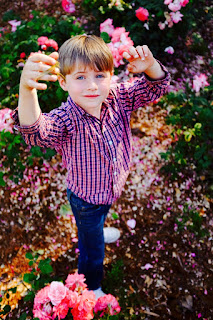 I'm on Instagram now - realq6. My nom du pleur has been taken on every social media platform. It gives me identity crises.

A simple day with the boy - spent at the park playing, eating sushi on a bench, taking pictures in the rose garden with a toy camera, grocery shopping, a bike ride around the neighborhood, Rhys playing in the back of the car, making a sort of fort out of the trunk, happy as a boy.

While I was changing out the cds in the car's six-disc changer Rhys asked me about the one with the guy who... then he makes a lightning bolt shape on his face with the sounds, chick,chick, chick! I say, a rainbow lightning bolt? And he says, Yeah!!! So, I pulled out Aladdin Sane. He became very excited in affirmation, that I knew what he was talking about.

I worried that I was inundating him with my tastes.

We added that to the disc changer and put it in the car. He said he wanted to drive around the neighborhood and play it, so that's what we did.

He tells everybody his favorite is Talking Heads, Burning Down The House.