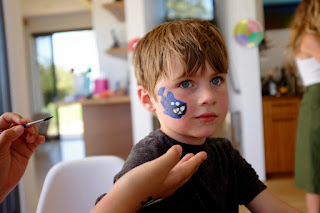 Bishop betta' have my money!

Watch the clip to the end, apparently nothing upsets some parishioners more than the sight of bishop blood. I mean, any blood other than that of the sacrificial lamb - they drink that stuff along with the body of a cracker.

The birthday party was pleasant. I'm glad I went, Rhys feels the same. The boy has a civilizing effect over me the way that some old girlfriends used to, one in particular, though without any of her pacifying qualities. It's an odd realization, watching yourself mature only to the maturation needs of another. The necessity arrives at such a consistent pace that I keep expecting it to become predictable, but the increase in the frequency and severity is always just ahead of the faculty of foresight. It's almost maddening, if it wasn't so absurdly predictable as to also be comforting.

Funny, that. I'll probably miss it when it stops surprising me.

I should be more careful with what I write here - I feel as if I've said that before. Sonoma is a very small town. I'm not quite sure how to explain that yesterday's post wasn't about anybody at all, certainly not about the birthday girl whom I had hardly met, and not even about my son who wrote the letters on the envelope - an envelope I did not use, by the way. I just taped the card to the wrapped gift, not truly wanting the mothers of children to have to come to terms with an unintentional phallic symbol at a kid's birthday party. If the letter A would have been bigger, and had hairy balls attached to it, then maybe. Maybe.

Last night, I discovered the complete and total secret to cooking: salted butter. I've lived in liberal enclaves for too long, and have been using olive oil way too much. I fried some whitefish in salted butter last night, put garlic and butter in with the potatoes as they were baking, dripped the juice over the Brussels sprouts. I felt like a male Paula Dean, or maybe like her son; Jimmy Dean. Though most would rank me neck and neck with his useless cousin, Bubba.

Bubba Dean Pork Burger & Buns, when your microwave don't feel like making anything fancy for breakfast...

I should have gone into niche-advertising, catering to family-owned southern restaurants and food manufacturers only.

It's been too long since I've been to the south. I'll have to make sure that I get some good southern food when I go back with the boy, in July. Just to sit and have a glass of sweet tea with free refills. I never thought that I would miss it, but after almost 15 years in New York I hardly even remember what real tea even tastes like any more. I'm polite when somebody pours me a glass of tea, but that shit is horrible when made by anybody north of Arlington, Virginia and west of Beaumont, Texas.

What the fuck is Canola oil and why hasn't anybody warned me about the uselessness of this cheap Canadian brake fluid? It was this poison that caused me to end up cooking with butter. I tried to use it like olive oil, but this cooking urine has no real apparent purpose. It should only be used by firemen in training to practice cleaning up kitchen oil spills. Never apply this rapeseed culture to a heated pan in advance of also placing food in that pan with the intention of eating it. I'm told that it is a healthy option, so I'm going to rebottle it and sell it locally as suntan lotion.

I set the tent up in the living room for the boy to sleep in. We read stories by flashlight last night. His mother pointed out to me that he is struggling with the pronunciation of some words. To my surprise, when I listened for it I could easily hear it, but had ignored it up to that point somehow. Love is powerful stuff, it allows for any of number of qualities to be pleasantly ignored while other are amplified. Love is the distortion field we all crave. It breaks my heart a little bit now, to hear the boy reciting after me the same lines that I just read. I wonder why I wasn't reading this way with him all along. He is so sweet and wants so badly to prepossess all manner of proficiency. He asked me why we are practicing when he already knows how to speak. I explained that the practice was for me, of course. What would you have said? It worked.

He struggles with a number of letter combinations. I really noticed it the other day when he was asking me, Is Sunday still in spring? It sounded as if he was saying swing instead of spring. I tried a few different combinations of similar words until I happened upon spirit, which he was very close to being able to say. So, we're practicing that one now in the hopes that there will be some spillover success into other words that start with the s-p combination. I expect him to have sporolactobacillaceae,  sphygmomanometrically, and sphygmoplethysmograph mastered by this afternoon, or the beatings begin.

After we set the tent up the boy and I were lounging around in it, telling stories. We started paying a bit, as my club foot allowed, and there came a point where he climbed on my back and I lifted up on all fours. This brought him a tremendous amount of joy - riding Dad like a Tyrannosaurus Wreck. He struggled to stay mounted but we marched around the tent with him laughing orders of direction and vowing to vanquish dragons. I kept acting as if I was too exhausted to go on and I would fall face first into the big pillows we had lined the tent with. He kept commanding that I rise again and continue marching, only to collapse again in giggles and excitement.

Over and over and over again. It started doing me in a bit, realizing that as soon as he felt like he was in control he mimicked his perception of my behavior, which must seem exclusively or predominantly corrective to him. That's not how I want him to feel about me, but I am his dad... so, I do find myself correcting and explaining things to him more and more. I discuss his behavior and its effects with him in a way that somebody must have also done to me at one point.

I kept thinking, I've done way too many hard drugs for you to be chanting that poison into my head. It was doing me in a bit, to hear my son have such glee in his voice to suddenly feel as if his version of behavior was the new law, and that dad was subject to his discretions.


Having a son has maybe made me a better monster.