Of course writing about an affliction is boring, but it has occupied me since Thursday night. I have been hobbled by some foot demon who wishes to do harm to my temporary soul. He's made inroads to that very purpose. Demonic depression is settling in now, also. I refer to the demon with the male pronoun He because I do not believe there are female foot demons.

Holy Crapola. I just did a search, to find a list of biblical demons, and instead found a page that simply attempts to explain their existence. Towards the top of the article I found a subsection (Theories Surrounding the Origin of Demons) that included this sentence: There are a number of suggestion origins of demons, with the most logical being that they are fallen angels.

None of what they bullet point after that qualifies as a theory and I can not determine what it is they purport to be surrounding. Neither does it offer much detail to establish a line of logic, it merely shoots down the idea that they are the souls of the dead, which should be frolicking in the lake of fire awaiting eternal judgement by now, but the claim is made nonetheless. There is a circling theory that also suggests that demons are the product of the unholy union between angels and mortal women. This theory offers the most promise in terms of explaining a number of different phenomenon with the simplest and most testable explanation.

I guess the author missed the part about a theory needing to rely on general principles independent of the thing that is being explained. Who needs demons when we have actual humans wandering the earth believing this stuff. With this sort of logic in the air it is difficult for me to see this foot malady as anything other than a demonic locust perched 'neath my Achilles. It is the demon of Red Bull. I can feel its wings flapping.

Demons will stop at nothing to cause the righteous to stumble, so you can imagine the effect they have on the wicked.

After I make an appt. with the doctor I'm going to see if I can get a priest to come in and take a look. I hope that he won't need to exorcise me - holy fluids in the rectum. There must be a better way. I wonder if there's a requirement now for priests to bring a nun along with them when conducting these covert operations, the way that you're not supposed to get your ding-dong out in front of  a doctor any more unless there's a nurse there in the room to make sure he doesn't gobble on it like an out of control junk junky.

Lawyers have ruined everything that the politicians didn't get to first.


I have my issues with some of the rhetoric that I hear coming out of feminists, particularly when it appears on the lips of privileged white women, but Jesus... patriarchy is some pernicious stuff. Adults seriously discussing the possibility that demons are the result of angels impregnating women... How do you counter solid science like that? If only there were an ancient document that disagreed with Christianity....

I didn't even know that angels had cock and balls. That anatomic detail has been mainly missing from their holy representations. It's no wonder Raphael only includes the upper portion of his famously naughty cherubs. Those little satyrs likely had fiendish knee-hangers dangling amidst the stars and heavens above us. I'm sure that mortal women were only using them to get backstage to talk to God.

Everybody else has to smoke DMT. 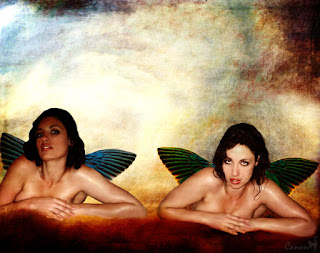