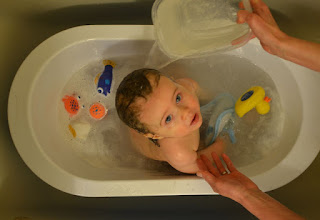 It's shameful, the way I post pics of the boy when he was a baby, just cheap clickbait tactics.... Though, looking at this picture does something to me. Having children becomes a series of very odd experiences, many of the type that I was perhaps not quite ready for. It's a different way of experiencing time. A much larger venture than anybody described, and they even tried to be very emphatic when reminding me that it would change everything about my life, which it nearly did.

Even with all that considered, the boy is a simple gift given from a complex universe.

There seems to be an obligation to examine the feelings of love, though the results of those inquiries have no special obligation to the questions being asked. Everybody approximates, based on nearly incomparable experiences. Intelligence is rarely given credit for all the good it has done. People are openly suspicious of it, only because it can also be terribly misused. Somewhere within it I have discovered a new way of being, and of feeling about that being.


The foot is showing subtle signs of improvement. I will test its resilience later today in recreating the Flashdance video, Maniac. I may need to break out my tights, leg warmers, and my treasured 10,000 Maniacs cassette tape.

I was able to crutch myself a few blocks down Market St. to meet friends last night. I had nearly forgotten how pleasant being in the city can be for such a thing. I watched the NY Rangers lose to the Ottawa Senators. I only ever watch hockey during the Stanley Cup playoffs, so don't let this fool you. I don't follow any sports teams or cities, really, but I do favor teams from NY and SF, but that's because I'm one of those lame regionals.

I'll be back to Flashdancing in no time. I'm certain of it.